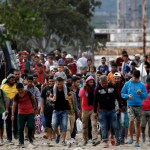 The Syrians Who Refused to Give Up

Samar Yazbek’s searing new book about her Syrian homeland is a testament to the indomitable spirit of her countrymen in their struggle against the Assad regime.
Samar Yazbek’s shocking, searing, and beautiful new book, The Crossing: My Journey to the Shattered Heart of Syria, describes three visits to Idlib province in northern Syria, an area liberated from the Assad dictatorship “on the ground but betrayed by the sky.” (…)

So Yazbek finds her homeland changed to a landscape of burnt fields and cratered marketplaces, with boys picking through collapsed homes in search of things to sell and displaced families sheltering in tombs and caves. Death is ever-present. Gardens and courtyards have become cemeteries. Yazbek never shies away from the horror but builds something worthwhile from it, a record and a reflection, for death is ultimately “the impetus of writing and its source.”

Known today only for war, Syria is heir to an ancient civilization. Idlib province houses the remains of Ebla, a 5,000-year-old city, and is dotted with half-intact Byzantine towns and churches. The war’s “ruthless sabotage of history” has damaged these priceless sites. In Maarat al-Numan the statue of 9th-century poet Abu Alaa al-Maari, a native of the town highly respected in his own time despite his unusual atheism, has been decapitated by armed Islamists. And the wonderful mosaic museum at the same location has been bombed by the regime and looted by various militias.

Amid these ruins Yazbek encounters a people giving voice to their aspirations after half a century of enforced silence. In revolutionary towns the walls are “turned into open books and transient art exhibits.”

But amid these ruins Yazbek encounters a people giving voice to their aspirations after half a century of enforced silence. In revolutionary towns the walls are “turned into open books and transient art exhibits.” Activists organize “graffiti workshops, cultural newspapers, magazines for children, training workshops, privately-run community schools.” In the context of state collapse these projects are born of necessity, but they also reflect the kind of society the revolutionaries hoped to build—inclusive, democratic, forward-looking—one which they are in fact trying to build, even as extremists fashion their own, much darker versions.

Through self-organized committees and councils, Yazbek is told, “each region now has its own administration, and every village looks after itself.” This—Syrians’ willed self-determination, Syrian creativity amid destruction—is the positive story so often missed in the news cycle, and it represents a hope for the future, faint though it is. The activists know they are working against insurmountable odds, but continue anyway. They document atrocities and reach out to international media, an endeavor that has so far failed to bear tangible fruit. When they can, they laugh—it’s “as though they inhaled laughter like an antidote to death.” (…)

But she’s an activist first of all, helping on these trips to establish women’s centers throughout the Syrian north (partially funded by her Soriyat for Development charity) to “resist the radicalization of society through education and economic empowerment.” Doing this she meets female activists, war widows, women whose sons have been dragged from their arms to be shot, and impoverished girls who see no option but to marry much older men. She provides intelligent commentary on how the violence marginalizes women but also (by making them the chief breadwinners) increases their responsibilities and (sometimes) their independence.

Yazbek spends time in Kafranbel, the rural town internationally known for the witty, multilingual, media-savvy slogans and cartoons on display at its weekly demonstration. The activists here are setting up a radio station. Raed Fares, wanted by the Assad regime and survivor of an Islamic State assassination attempt, describes it as “a public space for debate … to talk about our problems in a responsible and transparent way.”

Her constant companions, protectors, and fixers are men of the Free Syrian Army, “an extremely diverse set of groups, with varying characteristics and attitudes—from the cruel to the compassionate.” They ought to be called “armed people’s resistance brigades,” she opines, given that they are “really just ordinary people such as one might meet in the street.” These locals, trying to defend their communities, are starved for funds, weapons and ammunition. “If we had anti-aircraft guns,” one complains, “Assad would have fallen long ago.”

The Islamist extremists, on the other hand, benefit from generous funding. On Yazbek’s second journey, in February 2013, she sees foreign jihadists traveling light, “equipped with all they needed for their deaths.” In Saraqeb, the al Qaeda-linked Nusra Front is running a sharia court. Playing their financial advantage and exploiting disputes between families and villages, Nusra and similar groups are building a power base. Trauma too plays a role in the rise of the Islamists. Their numbers increase “after each massacre.”

By her final visit, in July and August 2013, the checkpoints are as often manned by Iraqis and Mauritanians as Syrians. Decapitations have become common. She is present (protected only by a veil and a wall) when Polish journalist Martin Soder is abducted by ISIS.

Between regime violence and Islamist reaction, the space for dissident Syrians like Yazbek is shrinking.