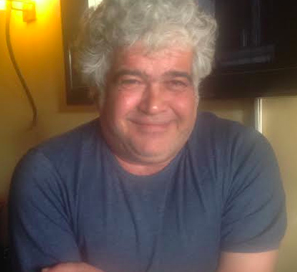 [1]Khaled Khalifa, shortlisted for the IPAF 2014, is interviewed by Sayed Mahmoud and Mohammed Saad, for Al Ahram English [2]
Published on Monday 17 Feb 2014
Below is an excerpt.

Digging deep down beneath Syrians’ memories of pain, Syrian writer Khaled Khalifa does not fear approaching one of the most sensitive and bloodiest events in the modern history of Syria.
He believes a writer should be harsh; his job is not to rest in traditional ideas and hide facts. On the contrary, he has to provide an anatomy of society and orthodox ideas. It is an excavation beyond the visible, an excavation in the self and the place.

In an interview conducted with him in Cairo after he was shortlisted for the International Prize for Arabic Fiction, or the Arabic Booker, for his novel La Sakakin Fi Matabekh Al-Madina (No Knives in This City’s Kitchens), he expressed an optimistic view of Arabic novels. Yet he sees the road to competing with international literature is still long.

“We should look to ourselves as part of the world, a lot of efforts should be made to make the Arabic novel able to compete with world literature, and this could happen through translation, world prizes and many other things.”

Khalifa has a belief that this will not occur through one person’s effort or success: “I’m telling you we will not make it as individuals, but as a culture.”