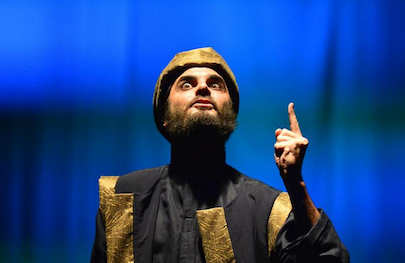 [1]This article was written by Thanassis Cambanis for the Boston Globe [2].
January 12, 2014.
Below is an excerpt.

The play was never performed in Syria during Wannous’s lifetime. The official excuse was that the sets were too bulky to import from Beirut, where a truncated version had been staged, but it couldn’t have helped that the real-life mufti of Aleppo issued a fatwa against the play. Even in Beirut, the director avoided state censorship by calling the mufti by another name.

That might sound like an evasion from another era, but little has changed. The director of last month’s production also changed the title of the mufti, using the less-religious “sheikh.” Lebanon’s censor regularly shuts down plays, concerts, and other performances; to reduce the likelihood of censorship, the AUB producers didn’t charge for tickets. During the final performance, emboldened by the show’s success, some of the actors reverted to Wannous’ original language, calling the character “mufti.”

“I told them that if we got fined, they would have to pay it,” said the director, Sahar Assaf.

SEEN TODAY, “Rituals” still falls afoul of numerous taboos in the Middle East, from its attack on authority and religious hypocrisy to its unvarnished portrayal of child abuse, rape, and the persecution of gay people and women who seek equal rights. The audiences squirmed as much during the tender love scene between two men as during the soliloquies that reveal the mufti as a power-hungry schemer and another vaunted religious scholar as a serial child molester.

The continued power of Wannous’s work illustrates both his success as an artist and his failure, at least so far, to unleash the societal transformation for which he yearned. He aspired for a society where individuals could live free from tyranny, including the tyranny of his own Alawite sect. These are still not opinions that establishment Syrians are expected to discuss aloud. His daughter Dima, a journalist and fiction writer, last summer wrote approvingly about the spread of the war to Alawite areas. “Now they too will know what it means to be Syrian,” she said. She drew death threats from her father’s relatives.

One of the Wannous’s best-known lines comes not from a play but from the speech he delivered for UNESCO’s World Theater Day in 1996. It was the first time an Arab had been granted the honor, and it’s fair to assume Wannous knew he was speaking for posterity. “We are condemned to hope,” he said, “and what is taking place today cannot be the end of history.” At the time, he was speaking of the decrepit state of theater in the Arab world, but the phrase has lived on as a wider slogan.

Today the tradition Wannous embodied—the high-profile artist-intellectual driving a national conversation—is almost vanished itself. Throughout the Arab world, the publishing business has long been in decline. Millions watch high-end Arabic television serials, but only a few thousand attend theater productions. Most of the great dissident intellectuals are dead, and none in the new generation have achieved political influence. “Today’s intellectuals didn’t start the revolutions. That’s why they have to follow the people instead of leading them,” said Dima Wannous. She finds it particularly galling that sectarian religious fundamentalists have come to dominate the uprising in Syria, which she has been forced to flee because of threats.

Yet it’s also possible to see in Syria a testament to the staying power of Wannous’s ideas. The dream of a secular democratic state, the local initiatives to deliver food and health care, and especially, the early days of the revolt that pitted nonviolent citizens against a pitiless regime, all hark back to the ideals of Wannous—namely, his rejection of received authority and belief that if something better happens, it will arise from within. In 2011, when demonstrators first marched demanding the resignation of Bashar Assad, the signs some brandished read: “We are condemned to hope.”

Thanassis Cambanis, a fellow at The Century Foundation, is the author of “A Privilege to Die: Inside Hezbollah’s Legions and Their Endless War Against Israel.” He is an Ideas columnist and blogs at thanassiscambanis.com.