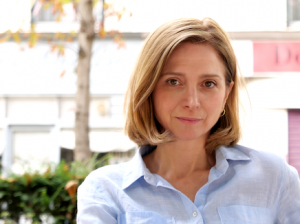 “Samar Yazbek, the soldier of Syrian memory”
By Victoria Gairin, for Le Point
(Photo credit: Rania Stephan)
Revealing the truth is what drives Samar Yazbek. “Quick, before we all sink into collective amnesia. I am so afraid that we will all lose our memories… We cannot retain from a conflict only figures!” Yet they are there, relentless and monstrous, yet another record of an endless conflict. More than 380,000 dead in almost 9 years, according to the Syrian Observatory for Human Rights on Saturday January 4.

Among the victims, more than 115,000 civilians, including 22,000 children and 13,612 women. Syrian journalist and novelist Samar Yazbek does not forget who is hiding behind these deadly reports. Better, coming out of the wild emergency which had guided her until then since her exile in Paris in 2011, she testifies and now dedicates her life to a gigantic project already planned in several books: to record the memory of the Syrian conflict. “This book is my way of resisting,” she explains. I believe that writers and intellectuals have a moral duty to the victims, that of fighting against oblivion. ”

For three years, Samar Yazbek therefore went to meet fifty-five women, to record their testimonies. Ordinary Syrians, aged 20 to 77, from Damascus and Ghouta, Idlib and its countryside, Aleppo, the coastal region, Homs, Hama, Quneitra, Raqqa, Deir ez Zor. Syrians from the middle class and often university graduates, who, far from the stereotypes of the victim and passive woman, all chose, at the risk of their lives, to take part in the uprising, dreaming of a free Syria and democracy, not only for women but for all of their fellow citizens. “We have risen for life and it is death that we reap,” Sara, a young translator, 21 years old, carried away when the revolution began.
“We saw ourselves as the fighters of a dictatorial regime and its natural ally, religious obscurantism,” continues Samar, “but the war and its harmful consequences on our human relations have imprisoned us in a sharp duality: to be the extension of our executioner and its ramifications that are Daesh and jihadist groups or be reduced to being only shredded bodies, groups of broken human beings, survivors of massacres, and trapped in the bitterness of having survived and having to continue to live. This last image sticks to our skin, it has become a kind of tattoo, an inherent part of our identity. In exile, this turns into humiliation.” The women to whom she gives voice give information, have become nurses, paramedics, journalists or even teachers, they take charge of food aid, illegally build bread ovens when famine threatens, pick up the corpses after bombardments, sometimes sew up the bodies before they are presented to families. In the depths of the war, they first think of feeding, helping, helping, educating.

At the start of the conflict, these women were first extorted by combatants, who preferred to buy weapons and demand that they wear the veil and not spawn with any man. Then, when the Islamic State and its totalitarian delirium arrived, they were publicly whipped, imprisoned, tortured, raped. Since her departure from Syria and arrival in Paris, Samar Yazbek has never ceased to tell, to testify, it has become an obsession. In the Crossfire (Buchet-Chastel, 2012), is a feverish diary of the first three months of the uprising in which she participated in Damascus in 2011, before being arrested, interrogated by the secret services, and discovering what acts of torture were practiced in the jails of her country. In The Crossing (Stock, 2016), she spoke of her three clandestine incursions in 2012 and 2013 in Syria now at war.
The 49-year-old novelist, who, along with her testimonial books, also publishes novels, confides to work on a next book devoted this time to Syrians of the most vulnerable classes, and on another concerning the fate of women in refugee camps. Choosing “19 Women” as a title for this essential and disquieting testimony  is a modest way of distilling her own voice, which is clearly heard throughout the collection. A way of saying that this twentieth woman has not said her last word.