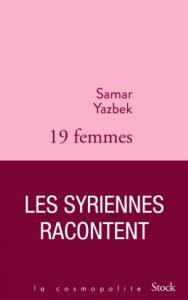 We must not let the memory of the events that have occurred since the first demonstrations in March 2011 dissolve, and demand more democracy (…) “So many things have happened,” she said, “magnificent and cruel, that you must tear yourself from oblivion. And there are so many other elements to show Syrians as this image of shattered victims, undermined by bitterness. They fought. They acted. They hoped. And the cause was noble. We must give them justice. Tell the truth ! Quick, before we sink into collective amnesia. I’m so scared that we all lose our memory! ”

This is her obsession. Since her departure from Syria in 2011, and her arrival in Paris, the poet, novelist, and journalist has continued to testify. Her books are an invaluable contribution to anyone who wants to understand the Syrians’ descent into hell (…)

It has been impossible for her to cross the border ever since [her book The Crossing], but her work as a scribe has become her “way of resisting”. Better: it came out of the wild emergency that had guided her until then to initiate, knowingly, a kind of great opus: To record the memory of the Syrian conflict. Nothing less. In her words: “to tell, by women, the true story of Syria”.
This precision is important: “by women”; but it does not in any way diminish the ambition of the writer. “On the contrary,” she says, “only Syrian women have the ability – and the courage – to tell the truth! The truth about the dictatorship of Bashar al-Assad, his violence and the rapes committed in his jails; about the “rebel” and jihadist groups, their gradual radicalization, their rivalries become wars, and their betrayals; about the Islamic State (IS) organization, of course, and its terrifying ignominy.

(…) The most conservative values ​​have been imported into the revolution by our fellow men, the same ones who they called themselves lay, democratic and modern! ”
Yes, she insists, “the women face a multi-headed monster. They entered the revolution dreaming of a new society that would promote gender equality. And they find themselves two hundred years back. They were trapped, surrounded, besieged. Men, of course, will not tell that. The word of women is the only one that allows us to approach this truth. ”

Thus, Samar Yazbek, 49, decided to have them testify. At length. Methodically. But freely. In their style and their language. In the diversity of their ages, denominations, histories, educational levels, social classes, geographical origins and fates turned upside down by war. A titanesque work, extended over several books, planned over years. “I will do it until I die!” (…) “I will never stop interrogating women. It is my intellectual duty and my due to the dead. This is the meaning of the rest of my life: to help understand the Syrian tragedy, to counter the story that is used to justify the crimes committed, to tell the revolution that we have been deprived of. ”

(…)
Before a forthcoming book devoted to Syrians of the most vulnerable refugee classes in camps, another on Kurdish women… Samar Yazbek publishes this autumn the first book of this vast project, soberly titled “19 women” (Stock, 300 pages, 25.50 euros). Nineteen stories in the first person behind which the writer fades away, refusing to use her novelist touch to better guarantee the authenticity of the words. Nineteen stories collected in the exile countries of these women (France, Germany, Lebanon …), with the exception of two, registered by Skype from Syria. This is a monument, we mean every word.

The writer, at last, is the 20th woman of the book. A heroine, of course. As the others. She continues relentlessly her work as a scribe. And the NGO she founded, which now brings together a network of 11,000 women, organizes fertile bridges between those who remained in Syria and the exiles (…)

In the depths of the war, [women] thought of feeding, educating, teaching and even giving lessons in democracy. “I know, it’s amazing. We lost, that’s right. But when we listen to them, we are still hopeful.” Samar Yazbek gave back their voices to the Syrian resistance fighters. And make a book for History.