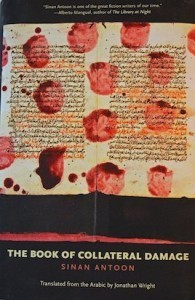 So many books have been written about the Iraq War (2003–2011) from both sides of that conflict, but Sinan Antoon’s The Book of Collateral Damage is unique in that it chooses to represent the human and environmental cost of that war. Nameer, an Iraqi American intellectual, visits his home country after the war and is traumatized by the hurt and damage he witnesses. Navigating the divide of his home and host cultures’ views of the war, he collects pieces of American news stories of the war and files them as “collateral damage.”

Wadood, his narrative double, imagines and documents the detailed history of the war as expressed by “colloquies” of the people, places and things damaged by the war. The two meet at al-Mutanabi Street, the historical cultural hub of Baghdad. Nameer is hired by American filmmakers to help document the devastation of the 2003 invasion of Iraq. Wadood, an eccentric bookseller, sends him a manuscript of a narrative catalog, “a circular history” of the war as experienced by the victims and the things that the war has destroyed. Nameer reads Wadood’s narrative as he navigates his life in the post-9/11 United States. The manuscript transfers Wadood’s trauma to Nameer, who is diagnosed with PTSD but refuses the bourgeois psychoanalytical approach to his condition.

Originally appearing in Arabic as Fihris (literally meaning index or catalog) the book is structured as a narrative collage of well-knit episodes of magical-realistic fiction that micronarrate the war as “experienced” by an index, a catalog of “things” the writer is restoring to memory through poetic language that retrieves the collective and personal traumatic memory. These episodes intersect with the semi-autobiographical narrative of Nameer’s life in elite American academia and the multicultural life of today’s New York. By tracing their histories and giving them voices to tell their stories of the war, the author reclaims his own narrative of what happened to his home country and navigates the cultural politics of his hybrid identity as an Iraqi American intellectual. However, in addition to the acute human attention to details, the novel moves beyond cultural and identity politics to a posthuman view of “things” beyond anthropocentricity.

Antoon’s rhetoric movingly goes beyond the argument for the human cost of war to giving agency to things and places that the war consumes as collateral damage.