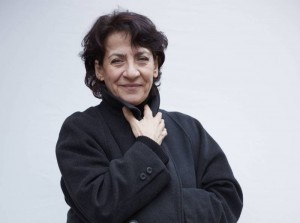 Interview By Christophe Ayad, for Le Monde [1], July 25th, 2019
Some extracts translated into English published below.
Hoda Barakat is a rare kind of writer. Born in Lebanon in 1952, she published her first novel relatively late, in 1990, shortly after leaving her country because of the civil war.In six novels, she has won almost all of the most prestigious awards in Arabic literature:

in 1990, the Al-Naqid Prize for The stone of laughter ; the Naguib Mahfouz prize in Cairo in 2000 for The tiller of waters; the Al-Owais Prize in 2017, in Dubai; and finally, in 2019, the highly coveted International Prize for Arab Fiction, awarded to Abu Dhabi under the Booker Prize, for her latest work, Night post. She is the first woman to receive this last distinction. As a teacher, journalist and translator, at the age of 67, Hoda Barakat can finally devote herself entirely to writing after having directed for years the Radio Orient editorial staff in Paris (…)

It’s ironic that the most prestigious prize for Arab literature is organized by a Gulf country, the United Arab Emirates, which is not particularly known for defending freedom of expression …

The regimes of some Arab countries are defending themselves in this way against Western critics and human rights organizations. They want to show that there is no censorship … That does not mean that they have become democratic. It’s like a double game. For a long time I refused official invitations. I would go crazy when I was photographed with the image of an Arab leader behind me. I ended up being ridiculous: even the authors I admire are in the juries of these awards of have accepted them.

And then my young readers told me or wrote me: we want to meet you, to speak with you. I write in Arabic, I can not refuse to go to meet my audience. But, now that I’ve had all the big Arab prizes, I’ll become even more radical.

How did you come to writing in Arabic while your education is French?

In my youth, everything led me to write in French. All my readings were in French. It started with The Great Meaulnes, then came Camus. I stopped there for a long time. I was troubled by this power that I could not define, but I was not aware of writing as an activity. I was very permeable. When I read Virgil Gheorghiu’s Twenty-Fifth Hour, it made me sick, I did not go to an exam. If I had a daughter with such a relationship to books, I would be worried (…)

I woke up to Arabic. I realized it’s a beautiful language. But I was far from being able to write in Arabic. I started studying on my own. This has been my most beautiful learning. He went through poetry, which was more advanced, more novel than prose.

(…)
This is how I discovered the great schism that there are two islams: the extremists from Arabia, carried by a very powerful current, and those who live in their century and have lost the battle

It is often said that Arabic is closely related to the Koran. Does one need to read it to write Arabic literature?

Everything that has been said and written about the unwavering link between Arabic and the Koran does not exist for me. I’m happy to respect the sacred texts, but the language can not be sacred and that’s why I can do what I want. I draw my Arabic where I want, it annoys me that we continue to hide the grandeur and modernity of this language that has adhered to all eras, all developments in the Arab world (…)What is the real subject of your books, war or Lebanon?

I never know in advance what I’m going to talk about. I wrote about how the community can crush people who do not follow its rules.

Is the civil war another nature of war?

In a civil war, you can not win. It’s like winning against your arm when you cut it. A civil war is shattering. For example, it is thought that the woman can not be a source of violence. It’s absurd. A civil war without women, that does not make sense. I saw horrors committed by mothers. They refused to bury their “martyrs”, their own children, before taking the sons of their enemies to the grave. Now, the whole Arab world is in civil war.
(…)Literature in the Arab world has long been crushed by political commitment. How did you escape?

From the beginning, I told myself that we had to give ourselves entirely to literature. Only Mahmoud Darwich [1941-2008] could jump the line between literature and politics with ease. He was very involved in the Palestine Liberation Organization (PLO), but we felt close to his poetry.

There were tons of publications whose only quality was to talk about “noble causes,” and which were worthless, literally. This is no longer the case, fortunately. The Lebanese war has been very effective from this point of view: these small bellicose ideologies have come to an end. This is where a second renewal could take place.

From my first novel, The stone of laughter, people wondered: where does she come from? (…) Someone even wrote: the language is very beautiful but it is not Arabic literature. It was a little treacherous, but I took it as a compliment. At that time, I loved Musil passionately. Fortunately I am not only Arab.

The war is there, the hate is still there. Those who went to war, the militia leaders, decide the fate of the country, which is suspended in pending peace. Young people know this because they still live this hateful division between confessions and factions.
(…)
How was “The Kingdom of this Earth”, which tells the story of your village of origin, Bcharreh, received in Lebanon?
Either people loved it or hated it. Some have read the first degree of enmity between the two Maronite villages and the wars they are waging. People did not like the lightness with which I treat religion and the way the characters make fun of it. It was lived as a little treason; but I say in the exergue that all love has its share of treason. At the same time, people are proud of me when they see an article in the press …However, I did write a play that I dare not publish or play in Lebanon, or in the Arab world, because the Virgin Mary and Mary Magdalene are characters in it. I was told it would not happen. And I do not like to provoke. When we live in Lebanon, we are supposed to adapt, collaborate, take a stand. And if we don’t want, we’re on the other side. I can not live like that.

You said that the Arab world is going through a great civil war. What effect does this have on creativity?

Of course these earthquakes will create new approaches and other ways of expressing themselves (..)

Religious books continue to be massively disseminated. But, in the forefront, there are new voices. The Arab world is subject to the dictatorship of petrodollars or dictatorship. It’s serious for people’s lives, but not for the quality of the expression.

In France, do you feel like you’re passing by or in exile?

Especially not in exile. I hate this word, which has been overused. As long as I write in Arabic about the Arab world, I do not really feel far away. For me, France is an area of ​​freedom in relation to social constraint. I can see things from a distance, be critical. It’s like a country house. It’s not my real home, but I need it. France offered me a lot: unlimited freedom, recognition, a passport and the opportunity to raise my children as I understood it. In Lebanon, this was not possible.
(…)
What did you say at the time of the 2015 attacks?

I was doubly horrified: as French and as Arab democrat. Imagine! I flee the war and the extremists in coming to Paris and I could have lost my children in a Parisian cafe because of these people. It’s surreal.

These people keep me from coming home, and here they prevent me from living normally as an Arab. They defile everything. When they shout “Allahu akbar! They chase me to my tongue. Let them invent a cry in another language! It does not belong to them (…)

You do not participate much in the public debate around Islam, jihadism and the Arab world, like Kamel Daoud for example. It is voluntary ?

As if, because I write in Arabic, had to enter the maze of Arab-Muslim tragedy. I am Arab but I do not feel concerned by the story of Kamel Daoud, by that of his country, or by his relationship with Arab culture, or with Arab masculinity.

(…) What is really regrettable is the attitude of the Westerners, the media. They must have pity, they must defend us. Kitsch is made to be easily received. It is flashy, and it gives good conscience (…)

When Syrian refugees arrived in Europe in 2015, did you think about your own departure from Lebanon?
Without pretending to be like them, that’s what pushed me to write my last novel: this feeling of being pushed out of his country, this feeling of loss. If I, while the circumstances of my departure were really better, have the feeling of being a stranger because of the smell of air and light that are different, they must live a hundredfold (…)