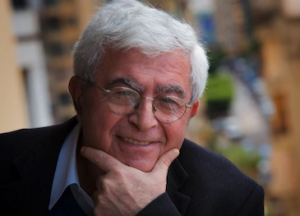 Adam Dannoun, the protagonist of Elias Khoury’s powerful new novel, calls himself a child of the ghetto. He does not mean the Warsaw ghetto — although, growing up in the newly established state of Israel, he allows his university colleagues to make that assumption. He means the “ghetto” of the Palestinian town of Lydda, created by Jewish forces who uprooted tens of thousands of Palestinians on a death march in one of the bloodiest massacres of the 1948 Nakba. (That term, which Arabs use for the founding of the Jewish state, means “catastrophe.”) Adam, a baby at the time, was one of those who remained.

Through layers and levels of storytelling — we are in familiar Khoury territory here, moving in and out of various narrations — “Children of the Ghetto” ponders the silence of those who stayed in Lydda. To survive in the new state they lived “as invisible people.” Why were they silent — to avoid being killed? Because they had given up hope? Or because what they had gone through was unspeakable, an experience for which “silence is more eloquent than words”?

The novel is highly intertextual. Khoury engages his own oeuvre in playful metafictional ways, along with real and invented scholarly texts, and larger Palestinian and Israeli literary histories to which this book is a timely and essential contribution. He rejects didacticism — “My story isn’t an attempt to prove something” — pirouetting between saying and unsaying, creating a mass of competing meanings from which Adam’s tormented psychology emerges. If Khoury makes any argument, however, it is that the expression of an “unadorned truth” is impossible, since all language is symbolic and metaphoric; words are weighed down by their histories.

The language of trauma is especially charged. As a child, Adam was diagnosed with the aftereffects of “trauma,” but only discovered what this meant at Haifa University when he “took a class in the Nazi Holocaust during which the professor described the trauma that afflicted Jews who had survived the disaster.” The muteness of Palestinians after the Nakba is something “imposed by the victor on the vanquished through the power of the language of the Jewish victim.” The very language of trauma is defined by the colonizers: “Ghetto” is a European word.

Comparisons — between Warsaw and Lydda, between the fall from Eden and the Nakba — lead us not into conclusions, but deliver us from binaries. Events and their shadows arabesque after one another, begging for interpretation and eluding it. To Khoury, signification equals death. Life is the opposite of a story.

Comparisons — between Warsaw and Lydda, between the fall from Eden and the Nakba — lead us not into conclusions, but deliver us from binaries. Events and their shadows arabesque after one another, begging for interpretation and eluding it. To Khoury, signification equals death. Life is the opposite of a story. Only because Adam Dannoun is approaching his own death does he consent to narrate himself, to become a “corpse made out of words.”

We finally reach the days of “the abyss” in Lydda, when those who remained were forced to bury their dead in mass graves: a horrifying few pages. For all his narrative twisting and disavowals, Khoury gives us a vivid glimpse of the unspeakable. Several texts haunt this extraordinary book — those of Ghassan Kanafani, S. Yizhar, Khoury himself — but I was particularly struck by references to Mahmoud Darwish’s “Memory for Forgetfulness,” about the 1982 Israeli siege of Beirut. For Darwish, recollection both expels the emotions of painful memory, and secures the past against historical forgetting. Unlike the events Darwish describes, however, the Nakba is “an ongoing process that hasn’t ceased.” Silence has not been defeated. No words can purge the Nakba, because the Nakba is still being lived.