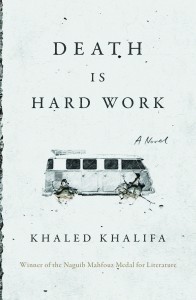 Set three years into the Syrian civil war, the novel’s plot is compellingly simple. Bolbol, the deeply sensitive and conflicted protagonist, has just lost his father. He gathers his two older siblings, Hussein and Fatima, to help him honour their father’s last wish – to be buried in Anabiya, the family’s ancestral village, about 350km north of Damascus. Ordinarily, the journey would take under five hours; if it weren’t for the sad occasion it would be a pleasurable drive, with plenty of nice places to stop and enjoy a good lunch.

In the present circumstances, where large swathes of the country have been bombed to the ground and the rest sliced up by checkpoints manned by opposing factions, the passage will be an existential struggle. But the siblings see no other option.

Throughout this diabolical road trip, glimpses of the past lives of Bolbol and his family, with all their imperfect and natural dramas, rise to the dark and unnatural surface of the present, becoming deformed and unattainable. Like the father’s body – which, regardless of the cologne Fatima lavishes on it, continues to bloat, growing darker and more pungent with every passing day – the memory of peacetime Syria appears to be decomposing as it gives way to the present inferno, where the “exceptional had become habitual, and tragedies were simply mundane”.

Bolbol’s real name is Nabil. He was given the pet name, meaning nightingale, by his beloved Lamia when the two were young. He has thought of no one else since, but was unable to act on his passions; now she is married, they are condemned to remain friends. But he “liked hearing others use the same name that [she] used”, and so the nickname stuck. This theme of a life lived with unrequited love is echoed by the father’s backstory, and seems relevant too to the situation that Syria finds itself in, caught between a tyrannical reality and dreams that remain beyond reach.

As they drive with the headlights off, so as to evade snipers, their minibus seems to Bolbol like a big coffin swimming through the night. He reflects on “the numerous coincidences that had saved his life”, remembering that “he even began to act as though fate had taken a special interest in him; when somebody panicked and pushed past him on to a bus, he told himself that being forced to take a later bus was no doubt for the best. The first bus was probably going to be hit by a bomb …” He concludes that, “in war, death is blind”.

The book is interested in that blindness of fate and the accidental nature of life, as well as the extent to which an individual can sustain his or her ambivalence in the face of a civil war. Confronted with binary choices, doubt is an active position. Bolbol is not for the opposition or the regime. Instead, his main enemy is fear. “Fear had become the only true opposition; it was now each individual versus their own fear.” As with his love, he struggles not to show his fear to Lamia, towards whom “he affected to be careless about his life, as he imagined a brave man might”. He even “began to feel that he was carrying out his father’s instructions solely on her account”. He recalls a moment when “he buried his fear” and attended an anti-regime demonstration with Lamia and his father. It “was like his first orgasm”.

A civil war is a national tragedy, but it is also, and perhaps most poignantly, a personal trial. The most amazing thing about this book is that it managed to exist, that it came to us out of the fire with its pages intact. It is