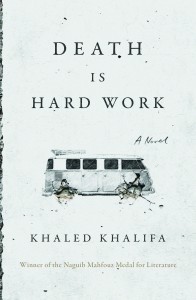 In a Damascus hospital, Abdel Latif breathes his last, his dying wish that his body be laid to rest alongside his sister Layla in their hometown of Anabiya. Normally Anabiya would only be a two-hour drive away, but in a Syria devastated by war Abdel’s children Bobol, Hussein and Fatima face an uncertain journey, with no idea what obstacles and dangers might lie in wait.

It doesn’t help that the siblings have barely seen each other in ten years, and a resentful tension simmers as they negotiate a land bristling with checkpoints and snipers. Khalifa has written a stunning, sobering novel which brings home the realities of life in a war-torn country and the fatalism that has settled on its population, while – at one checkpoint, officers decide to arrest Abdel’s corpse as there is an outstanding warrant for him – highlighting its absurdities.