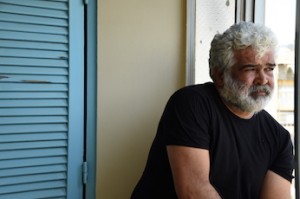 Khalifa, who lives in ­Damascus and has remained in Syria throughout the war, tells The National that the inspiration for his novel came from a personal experience. “In 2013, I had a heart attack and I was in the hospital and I thought about what would happen to me and my family if I died,”

“Five years ago, in 2013, I was in ­Aleppo for the last time, after which my city was ­scattered into many fragments, in ­photos and videos; images and items from news ­agencies, that tried to transform Aleppo into a ­virtual place or, at least, ­unreal, unknown to me,” the Syrian author Khaled ­Khalifa, wrote last summer in the Italian ­newspaper La Stampa.

Aleppo, Khalifa’s birthplace and the setting for most of his books, is the ­destination for three siblings in the ­poignant and darkly ­humorous Death is Hard Work, the author’s 2015 novel that has just been released in English, translated by Leri Price. His characters are making the arduous and perilous journey to the family burial plot in Anabiya, near Aleppo, with their father’s corpse.

Normally, the road trip would only take only a few hours, but in war-torn Syria it is an ­altogether different ­affair. The short (it is less than 200 pages long) and ­powerful work has been ­compared to William Faulkner’s As I Lay Dying, a family’s nine-day journey with the corpse of the mother, Addie Bundren’s corpse. In both novels, the trip allows the reader to become familiar with the deeply intimate thoughts and histories of each char­acter, including the corpse.

Khalifa, who lives in ­Damascus and has remained in Syria throughout the war, tells The National that the inspiration for his novel came from a personal experience. “In 2013, I had a heart attack and I was in the hospital and I thought about what would happen to me and my family if I died,” he says. “In 2012 and 2013 there were many stories about Syrians who couldn’t find the time or way to take the ­bodies of a family member to their village.

“The body would stay where the person died, people would bury their dead in their back garden.”

But the novel is not just about death, he says. The main character and younger ­brother, Bolbol, had been on Khalifa’s mind for 20 years. “Bolbol lived with me for a long time, this type of person who is afraid of everything – of the past, the future, the regime, of love. I found a place for him on the page,” he says.

Khalifa describes Bolbol’s sister, Fatima, with failed marriages behind her, of ­“middling intelligence”, while the older brother, Hussein, is “the face of bravery and ­buffoonery”, and Bolbol the face of “cowardice and ­capitulation”. Along their terrible journey, as they go through checkpoints, get arrested, and bribe their way out of detention, the siblings bully each other and quarrel, “thinking about how they would return to their loneliness and ­isolation after the ­burial, how they would have to avoid looking into one another’s eyes for fear of discovering the extent of the gulf separating them”.

The surreal and gruesome trip is the ­confir­mation of the breakdown of the family, and the ­relationship between siblings. “[In Syria] we are different now, because our dreams were lost and relationships in families became so difficult,” says ­Khalifa. “Hussein lost his dreams, Fatima lost her dreams, and Bolbol never had any dreams.”

All the while their father’s corpse is decomposing, yet it remains above the chaos and fray of their society that is deconstructing. The father had been a teacher, a product of the idealistic 1960s, unafraid to stand up for his values. Now, amid a ­country in shambles, the corpse, “however much it had lost, still still retained the advantage of being able to lie there without caring”.

The father, Abdul Latif, is a main character, Khalifa explains. “I wanted to talk about his history and his generation of the 1960s and ‘1970s. This was an important time for Syria, Iraq and Egypt; there was ­nationalism, and the [support for the] Palestinian cause. That generation was idealistic,” he says. “Now the rules have changed and it’s the Gulf [that’s important]. We have been paying the price for Arab ­nationalism until now; that generation is stuck in time, they are paralysed. What are Arab nations? This isn’t important for Syrian people any more.

‘They have no illusions about the regime’

“People are so tired,” he carries on, “ ­economic conditions are so hard, but life continues, and Syrians are looking for a new way of life. The new ­generation that was born during the war has no idea about the ­regime’s ideology. When I was in school, I knew this ideology. The new generation might not have projects for the future, but they have no illusions about the regime either.”

The painful conditions in Syria make writing all the more important for Khalifa. “We have new stories every day and we must tell the world about them.,” he says. “But I’m a slow writer, I haven’t written a lot of books and I don’t want to write fast.”

This makes Death is Hard Work an important book for Khalifa, but also stylistically speaking because of how it altered his style. “It changed the way I wrote. I wanted to write a short novel, because I wanted the writing to be strong,” he says.

His latest book – which has a working title of No One Prayed On Their Graves – will be out in a few months, published by Hachette Antoine for most of the Arab world, and by Dar Al-Ain in Egypt. The book focuses on Aleppo in the 19th century, during the Ottoman rule. Ultimately, it brings to a close the second phase of his writing as, Khalifa explains, he’ll begin to start concentrating more on ­technique, trying a new kind of narrative, and a new style of fiction.

“Maybe I’ll write about Damascus, maybe about Syria between 2000 and 2010. There are just so many subjects.”

The first cycle of his writing, he adds, includes the 1993 Guardians Of Corruption and The Notebooks Of The Bohemians, published in 2000. Both have yet to be translated into English.

For the meantime, Khalifa is happy to stay put in Damascus until the spring, and doesn’t foresee a book tour for Death is Hard Work. As an ­internationally renowned ­writer with a big personality, he’s often invited to literary events, but he prefers to stay at home and write.

He’s written about staying in Syria, even while friends and family leave, and during our phone conversation he says that he gains strength from being there. “What could I do for my people, living in Europe? Maybe because I live in Syria and I live inside Syria and am with my people, I am strong and have hope.”