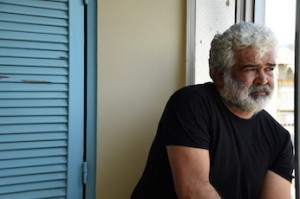 A review by Elliot Ackerman for The New York Times Review of Books [1], published February 26th, 2019

How many times can you read about barrel bombs falling on civilians in Aleppo or Islamic State execution squads or sarin gas attacks before the sheer quantity of incidents denudes each of meaning? The facts, devoid of a narrative, lose their weight. That’s the power of mass violence: its ability to transform specific loss into general loss, numbing our collective consciousness. This is why novelists like Khalifa are so critical in these times. They give us a story, and stories are specific.

“I can remember how when I was young I believed death to be a phenomenon of the body; now I know it to be merely a function of the mind,” Dr. Peabody says in William Faulkner’s “As I Lay Dying.” “The nihilists say it is the end; the fundamentalists, the beginning; when in reality it is no more than a single tenant or family moving out of a tenement or a town.” Had the acclaimed Syrian novelist Khaled Khalifa chosen an epigraph for his masterly new book, “Death Is Hard Work,” Faulkner’s words might have proved fitting, for Khalifa’s novel wrestles with similar themes of societal demise and rejuvenation on a tableau every bit as haunted by violence as the swamps, plantations and red-clay roads of Faulkner’s fictionalized Yoknapatawpha County of the Reconstruction-era South.

With the conflict in Syria smoldering into its eighth year, a challenge for those seeking to understand the war is how to place its ceaseless atrocities into a larger context. How many times can you read about barrel bombs falling on civilians in Aleppo or Islamic State execution squads or sarin gas attacks before the sheer quantity of incidents denudes each of meaning? The facts, devoid of a narrative, lose their weight. That’s the power of mass violence: its ability to transform specific loss into general loss, numbing our collective consciousness. This is why novelists like Khalifa are so critical in these times. They give us a story, and stories are specific.

Khalifa is a mainstay of Arab letters, having won the Naguib Mahfouz Medal for Literature for his previous novel, “No Knives in the Kitchens of This City [2].” However, “Death Is Hard Work,” his fifth novel, is his first set during Syria’s current war. Like the Bundren family in “As I Lay Dying,” the siblings Bolbol, Hussein and Fatima gather after the passing of their father, Abdel Latif, to honor his last wish, that “his bones would rest in his hometown beside his sister Layla.”

Abdel Latif, an intellectual who is sympathetic to the cause of Syria’s rebels, makes this request to his son Bolbol, who is caring for him in Damascus at the time of his death. Transporting Abdel Latif is no small feat. Although under normal circumstances his hometown, Anabiya, is only a few hours’ drive, it now involves crossing from regime-held into rebel-held territory, and will take several days. The physical obstacles to the journey — corrupt officials, trigger-happy soldiers, indiscriminate airstrikes — will prove only half the challenge. The other half will be reckoning with the family’s past.

That reckoning includes Hussein, the elder son, who was Abdel Latif’s favorite until they became estranged years before: “He had no desire to repeat his father’s small-town life of teaching and respectability. He said he hated the world of weaklings; he wanted to live among the powerful.” Hussein didn’t make it far “among the powerful,” winding up as a minibus driver and an errand boy for local toughs while his brother, Bolbol, “was no good as a replacement: His weakness and anxiety had never exactly endeared him to Abdel Latif.”

Fatima, their sister, is the last of this triumvirate enlisted to transport Abdel Latif to his final resting place. Like her brothers’, her life is defined by its disappointments. Fatima is trapped in a loveless marriage and servitude to the men in her family, despite being the smartest of the siblings. “The traces of her lost pride were still visible on her face. Everyone who loses their pride becomes a miser of a sort; their self-importance increases, their eyes die out, and their resentments accumulate.”

As the three siblings journey from Damascus to Anabiya, we witness a terrain blighted by violence, but it’s also a terrain blighted by an accumulation of resentments, the millions of indignities suffered by a society forced to live under the scourge of authoritarianism and, now, civil war. At every checkpoint, every rest stop, every halt in traffic, there is another reminder of all that Abdel Latif’s family has endured. His sister Layla’s death was particularly violent. On her wedding night, when her father married her off to a man she didn’t love, she climbed onto the roof of the family home and, in sight of the wedding party, doused herself in kerosene and lit a match. (Mohamed Bouazizi, the Tunisian fruit vendor whose death was the [3] catalytic event [3] marking the beginning of the Arab Spring and, subsequently, the Syrian civil war, also ended his life in an act of politically inspired self-immolation.)

“The past is never dead,” Faulkner famously wrote. “It’s not even past.” This seems an apposite companion to a passage that comes late in “Death Is Hard Work”: “The shame and the silence they had lived through for years were exacting a price, and everyone would pay it, executioners and victims alike.”

Many fine American writers have claimed the mantle of Faulkner’s successor through their chronicling of life in the South. But Faulkner wasn’t writing only about the South. He was writing about civil war, too. With “Death Is Hard Work,” Khaled Khalifa has, intentionally or not, also laid claim to that title.