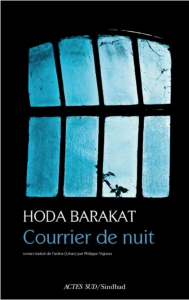 Hoda Barakat has imagined a correspondence written in haste, by people constantly on the run, all seeking a refuge that does not exist.

Hoda Barakat (born in 1952, in Beirut), author of five novels published in France at Actes Sud, creates characters who wander the planet, men and women. Homeless, they are the victims of misery, social change and the conflicts that plague the world.

In a hundred and forty pages, these stories capture these lives at the turn of an Odyssey that knows no possibility of return. Each chapter is a letter addressed to a mother, a father, a brother, or a lover. In this suspended time each character tells their story in the urgency of the moment, before disappearing in direction of an unknown destination.  The stories are scribbled in the heart of the night, on a table corner, in a hotel room, on the knee in an airport … These anonymous travelers sometimes hesitate before throwing their missive into the bin. Others misplace their letter, stuck between the cushions of an airport seat. Not a single message safely reaches their destination. These confessions are retrieved by a passer-by who, in turn, decides to write to a loved one. Each new chapter is a new confession. The book therefore unfolds like a “cadavre exquis”, each letter chasing another to tell a relative or loved one the burden of an untold past. Some carry the worst memories – of war, rape, and servitude. At the heart of the book, one of them admits in writing to his mother his previous life as an executioner of an authoritarian regime. Today, “having lost hair and teeth”, he tells with sobriety the torture and rape that made of him the monster “who terrorizes others”. He could be Syrian or Iraqi. Hoda Barakat does not specify. These are the dark portraits of potential asylum seekers, so often reduced in a binary way, either as carriers of a potentially contagious illness, or considered worthy of pity, though nothing is known of their past lives in their destroyed countries.
Aren’t they hundreds of thousands to roam without any home to return to, never able to land
men and women in a state of eternal departure, whose path we cross everyday here or there. Their existence knows no truce, doomed to short stays that provide no rest, stranded undead in foreign lands.

Hoda Barakat thereby penetrates the intimacy of beings we too often only consider from the outside without ever being able to tell what they carry within them. Their volatile destinies is here restored in all its contradictions. The novelist’s brain produces these nights where thoughts are ablaze, enabling her to examine those who are bruised by the world’s cruel violence.