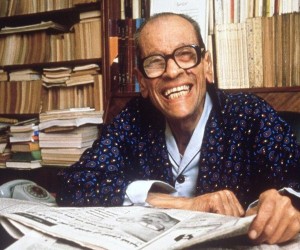 The collection “The whisper of stars” will be published by Dar al saqi on Naguib Mahfouz’ birthday, on December 11th.

World translation rights (except English) are free, and managed by RAYA agency on behalf of Dar al saqi, Beirut.

Culture journalist Mohamed Shoair, was in the middle of writing a book on one of Mahfouz’s works.

As Shoair was documenting the publishing history of the novel, he searched through thousands of archives, books, magazines, and newspapers.

Throughout his search, in the home of Mahfouz’s daughter Um Kulthum, he came across a file of 50 short stories handwritten by Mahfouz, and entitled “for publishing 1994”. Shoair and Um Kulthum found that 18 of these short stories were never published in a book. 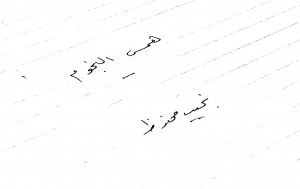 All the short stories of The whisper of stars take place in a popular neighborhood of Cairo. Though each story stands alone, some characters appear in various places, providing the collection coherence and a tangible atmosphere.
Sometimes tender, sometimes funny, sometimes dreadful, almost always ironic, these stories still depict, over 20 years later, an aspect of Cairo’s contemporary society.

Read more about the story of this collection on the Egyptian daily Al Ahram [1]‘s website.