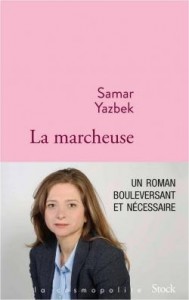 “Syrian writer Samar Yazbek imagines a very metaphorical female protagonist who discovers war and the virtues of literature.”
The Blue Pen, in French “La marcheuse”, will be published end of August 2019.

“Life is faster than it should be; this pen will be a witness to the end of my story.” Rima is attached to her story in a particular way. Deprived of father and of words, she is often considered crazy. But through the voluntarily disjointed tale of this lonely young girl, we better perceive the singularity of her being.

[…] At first, we are disconcerted by Rima’s unstructured flow of words, addressed directly to the readers. We don’t know if she is simple-minded, traumatized or locked in a narrow mental cage. But it doesn’t matter, since Samar Yazbek embarks us on a destiny “always pushed forward by an irresistible force.” The power of life, literature, art and a look that seeks to broaden the horizon. “To make words dance on the blank page” is the power of this poignant novel. Read more in French [1]