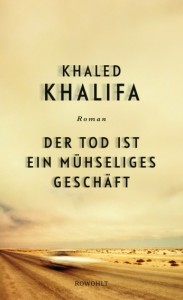 Renowned Syrian writer Khaled Khalifa lives in Damascus to this day. In his novel “Death Is Hard Work”, he tells of a country where the people’s survival depends on the mood of the soldiers.

There are few Syrian authors who have not left the country despite the seven-year civil war. In addition to Niroz Malek, whose text collection “The Stroller of Aleppo” appeared in German last year, one of them is Damascus-born Khaled Khalifa. Born in 1964 , the essayist, poet, scriptwriter and novelist is considered one of the main critics of Bashar al-Assad’s dictatorship still living in Syria. Khalifa’s novels, most of which are not allowed in his homeland, have been repeatedly nominated for the International Prize for Arab Fiction. “Death Is Hard Work” is his first book in German.

The focus of the book are the three siblings, Fatima, Hussain and Bulbul, who want to transfer the body of their late father from Damascus to his birthplace in northern Syria. […]

The three siblings have managed in their own way with the constraints of war, the conservative counterrevolution and the dictatorship, along with their “fascists with guns.” Fatima, who once wanted to be a teacher, has joined the ranks of oppressed wives with no rights and no will. Hussain, on the other hand, has become the protector of celebrities for Russian dancers in Damascus. And the former philosophy student Bulbul leads a shady existence as a dealer of dried fruit, becoming an exemplary citizen under the governing party of the Assad clan. Because shortly after the flare-up of the Syrian revolution seven years ago, thinking had already become a “real crime that was punished.” Khaled Khalifa’s characters are anything but heroes, and that’s what makes them so tangible.

He no longer worries about war battles, self-proclaimed militias or Assad’s torture cellars, Khaled Khalifa recently wrote in his essay on “The Last of an Empty Country.” Also, flight was out of the question for him, because he neither wants to lose his life in the Mediterranean nor his identity in exile. At his patron cafe in Damascus, he continues to write, inventing figures and creating fantasy worlds in anticipation of what the unpredictable reality may bring him. This spirit of inner exile, the silent revolution against a human tragedy, is present in every line of his novel. While the author endures being one of the last intellectuals in the country, his literary figures have long since succumbed to the war. Read more in German [1]