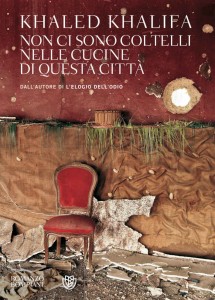 The novel about a prisoner’s life, a prisoner of violence but also of the thousand unpardonable compromises that a dictatorship imposes on oppressed individuals. There are no knives in the kitchens of this city (Bompiani, pp. 288, euro 18), tells through the life events of a family in Aleppo the genesis and consolidation of the Assad regime that dominates Syria since the Sixties, describing the internal repression and annihilation, which invites us to reflect on all forms of contemporary despotism.

A confirmation of the extraordinary narrative talents of Khaled Khalifa, born in Aleppo in 1964, one of the most significant authors of Syrian literature in recent years (with this book he won the Mahfuz award in 2013), but also a further testimony of his prominent role  in the progressive opposition to the regime in Damascus. A commitment that the ongoing war in the country has not mitigated.

At the beginning of the novel, one of the female protagonists, Sawsan, catches in the gaze of the man who has loved her for a long time, despite many difficulties, the attempt to live “a kind of extreme encounter with the ‘soul’ of the city, before it died.” Did he want to pay homage to his Aleppo, first crushed by the regime and then destroyed by the war, or try to announce some possible rebirth?
Sawsan sees the end of the city she loves approaching and in some ways also coincides with that of her family, perhaps of the very idea of ​​”home”, of a place and something of its own. The war is indeed only the last chapter of a tragedy that began a long time ago. This book is about social death. The possible disappearance of a city, and of an entire country as a result of the oppression that a regime like that of Assad has brought down on them. Fifty years of dictatorship kill the soul of any place. However, a city that has the thousand-year history of Aleppo can not completely die. I wonder how it can really disappear. But more than questioning the ruins I try to understand how we can live all this time under a dictatorship. Perhaps it is not by chance that the place where this novel was most successful was Cairo. My friends who live in the Egyptian capital claim that the book also speaks of their city. Because it also speaks of the loss of the role that these metropolises have exercised in the past, when life flowed freely, and what remains after along reign of repression and violence.

The figure with which this collective and individual decadence is translated into the book is that of shame. To reflect on what the regime has made of Syria, has it chosen to question what the dictatorship has made of each citizen?
Shame is undoubtedly the most common feeling among the characters in the novel, the one that unites them and at the same time opposes them. They are ashamed of what they see around them, of the system of generalized delusion, of the continuous blackmail around them, of what they have become because of the daily habit of oppression… Read more in Italian [1]