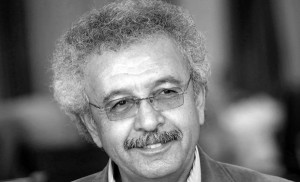 On April 24th, the prestigious International Prize for Arabic Fiction was awarded to Ibrahim Nasrallah for his novel “The Second Dog War”, a satirical novel, partly dystopia, partly science fiction, that depicts a not-so-distant grim future.

The novel is entertaining and was for Ibrahim Nasrallah an opportunity to explore uncharted literary territory. While offering a skillful critique of extreme forms of our contemporary consumerism and corruption, Nasrallah also goes over the transformation of a man, the main character Rashed, who goes from an idealistic rebel, to a powerful businessman, ultimately transforming into a religious extremist. A social transformation that sounds terrifyingly close to modern Arab history.

Below an excerpt from the International Prize of Arabic Fiction [1]‘s website.

“The novel, published by Arab Scientific Publishers, was named as this year’s winner by the Chair of Judges, Ibrahim Al Saafin, at a ceremony at the Fairmont Bab Al Bahr in Abu Dhabi. In addition to winning $50,000, funding will be provided for the English translation of The Second War of the Dog, and Ibrahim Nasrallah can expect an increase in book sales and international recognition.

‘The Second War of the Dog is a masterful vision of a dystopian future in a nameless country, using fantasy and science fiction techniques. With humour and insight, it exposes the tendency towards brutality inherent in society, imagining a time where human and moral values have been discarded and anything is permissible, even the buying and selling of human souls.’

The novel focuses on the corrupt main character, Rashid, who changes from an opponent of the regime to a materialistic and unscrupulous extremist. Nasrallah reveals the intrinsic savagery in human beings, as he describes a futuristic world where greed intensifies and human values and ethics are ignored.

Professor Yasir Suleiman, Chair of the Board of IPAF Trustees, comments:

‘Ibrahim Nasrallah’s novel paints a chilling picture of humanity in all its destructive potential. Without a moral compass, the protagonist lets go of the normal bounds that constrain human behaviour. Nasrallah expertly draws the reader into this world from different vantage points, using  crisp language in which humour makes the moral burden of relating to the main character “bearable”, or just so. His win is an accolade well-deserved.’

Ibrahim Nasrallah was born in 1954 to Palestinian parents who were uprooted from their land in 1948. He spent his childhood in the Alwehdat Palestinian Refugee Camp in Amman, Jordan and began his working life as a teacher in Saudi Arabia. After returning to Amman, he worked as a journalist and for the Abdul Hameed Shoman Foundation. Since 2006, he has been a full-time writer and has acted as a mentor to emerging writers at IPAF’s annual nadwa (writers’ workshop), in 2014 and 2016.

Four of his novels and a volume of poetry have been translated into English, including: Time of White Horses, which was shortlisted for the International Prize for Arabic Fiction in 2009; and Lanterns of the King of Galilee, longlisted in 2013. In a 2012 review of Time of White Horses, the New Statesman praised Nasrallah’s “intensely eloquent voice [that] gives Western audiences an insight into the lives of the marginalised”.