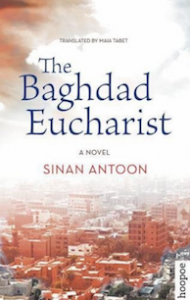 In his novel ″The Baghdad Eucharist″, Iraqi author Sinan Antoon probes deeply into the nature of loss and its impact on collective memory. Intertwining two distinct threads, he teases the reader to reach a conclusion about a community on the edge. Marcia Lynx Qualey read the book.

On 31 October 2010, a group of transnational militants forced their way into the Church of Our Lady of Deliverance in Baghdad, where regular Sunday worshippers were gathered. The militants fired on church-goers before they took hostages, holding them until Iraqi commandos stormed the building and saved around half of those within. Nearly sixty were killed.

Sinan Antoon′s ″The Baghdad Eucharist″, shortlisted for the 2013 International Prize for Arabic Fiction, is anchored around an echo of this massacre. Yet instead of happening in 2010, the fictional attack is moved into the future by several years, to a different 31 October.

Nearly all the book′s action takes place on this single tragic Sunday. It′s told through two voices: elderly, optimistic Youssef and his deeply depressed young niece, Maha. The former is a retiree who doesn′t want to leave Iraq, while the latter is a student at the University of Baghdad′s medical school, hurriedly finishing her education so she can flee.

The two voices are sharply different. Youssef′s tone meanders through Iraqi history, fondly touching on family photos and memories. Maha′s is relentlessly, miserably present. Both look back at their country′s history, but with an entirely different gaze. They see approximately the same events, but come to radically different conclusions about Iraq′s past, present and future. Read more [2]