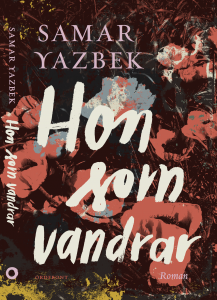 How do you describe a modern war? How do you put words on the most horrendous? These questions are all over the Syrian author and journalist Samar Yazbek’s novel The Blue Pen.

Trapped in a basement in Damascus, Rima is sitting and writing and drawing. She is a forgotten girl  in Syria’s hell. Nobody knows that she is sitting there waiting to be rescued.

An ingenious character and a literary approach on the verge of the unimaginable. Samar Yazbek’s novel The Blue Pen, is brave on many levels

She writes and draws because she has always lived in language and art – in the world of words and pictures. She slowly records her story; small, short fragments of her life. There is no obvious context, at least not at first, just absurd and unpleasant images of the daily life of war; roadblocks, tortures, bomb attacks, gas attacks.

Rima is not like everyone else. Throughout her growing up in Damascus, she has been told that she is crazy or mentally ill – a retarded idiot.

She does not speak, and walks constantly. If no-one holds her back, she wanders. The only thing that made her feel calm and safe has been books and pictures. Ever since she was four years old, she has read, written and considered. On the outside of the books, she knows almost nothing. She observes her surroundings, but is unaware.

Her mother and brother have done everything to protect her. They have loved her and kept her away from the misery of their environment. But now they are gone. Swept away by war. Killed.

Yazbek creates an ingenious character. The talented but ignorant Rima records, unaware, without interpreting and taking sides. She is a witness who sees and feels, but does not understand. Through her naive glance, the war appears like a scary and invincible hell. There are scenes that are so painful, so unbearable that I sometimes had to interrupt reading. Often, there are small and simple details that cause the most unpleasant associations — from the basement, Rima gets a glimpse of a skinny stray dog that walks around with a chopped human hand in its mouth.

In some parts, the novel reminds me of Imre Kertész Man without destiny. The same suggestive force, the same presence in the moment.

In some parts, the novel reminds me of Imre Kertész Man without destiny. The same suggestive force, the same presence in the moment.  But where Imre Kertész manages to proceed without losing credibility, Samar Yazbek sometimes takes the reader for granted. As a novel character, Rima is a bit too designed to really work. Her personality somehow does not hold together: She cannot at the same time be a trusted author and a person who does not understand anything about her world. I simply do not think of her – at least not all the time.

The construction is a problem, and sometimes it draws my attention from the design. But that’s forgivable, as on the whole, The Blue Pen is a readable and important novel that successfully portrays the civil war in Syria from the inside without becoming a political pamphlet.

Throughout the novel, a light surrealistic path runs. Rima’s favorite books – Alice in Wonderland and Little Prince- invade her consciousness and the boundary between imagination and reality is relaxed. Rima is, literally, Alice, and the torn Damascus is Wonderland. Rima is the little prince and she travels between the stars.

It is spoken that some of the war’s warlike depictions of war are the most absurd. Just think of Kurt Vonnegut or of Thomas Pynchon, whose novels challenge both truth and logic.
The Blue Pen moves in the same literary landscape. The production is not realistic – at least not in the ordinary sense of the word.

Perhaps this is something about the horrors of modern war: It is impossible to capture within the normal. The war blows all the limits of our understanding, our language, our ability to experience and recognize.

It will probably never be possible to grasp the unthinkable violence released in Syria – not even for those who suffer. Does it mean that the literature has to be silenced, give up?
I do not think so. Literature must always fight to exceed the limit of the unimaginable. Stories and words must be reinvented.

In his novel , Samar Yazbek is constantly pushing the border. Sometimes she surpasses it and then something new and scary occurs. Sometimes she stays within and the gesture dies. But she dares to try and we are grateful.