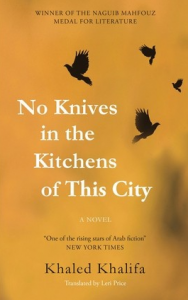 Aleppo has essentially fallen. The images have been unignorable, calamitous: of residents wandering numbly through burning city streets; of parents sobbing over dead children; of the strong wheeling away the weak. On Tuesday, a United Nations official described the massacre of fleeing civilians as “a complete meltdown of humanity.” Residents have been tweeting out their goodbyes. Tens of thousands have already been displaced or perished.

A once-thriving metropolis of wealth, power and culture is now in ruins.

Khaled Khalifa writes about his native city with sensuality and an almost feral intensity in his new novel, “No Knives in the Kitchens of This City.” The book focuses on just one family, and it stops several years short of the Syrian civil war. But it offers a glimpse into how terrified and empty of hope the people of a city must be to rise up in revolt. The future offers them nothing. It is a castle of closed doors.

“A festival of veritable insanity and strange odors,” Mr. Khalifa writes, “Aleppo became a city given over to ceaseless fear, a city of retribution, whimpering under the appetites of the mukhabarat” — the secret police — “and the corrupt officials who were proficient only in loyalty.”

Convention requires that I recount something of the plot of “No Knives in the Kitchens of This City,” first published in Cairo in 2013. But no synopsis can give a sense of what reading this book is like. Mr. Khalifa’s story is episodic rather than linear; it is more about an atmosphere, both emotional and physical, than any defining event. The author, whom this newspaper has called “one of the rising stars of Arab fiction,” writes in lush, pungent prose, some of it overripe, like a fermented banana. But some of it is also beautiful.

Here he is, describing Sawsan, the siren of the family, furious at a man for overlooking her charms: “She looked at him with the insolence she reserved for those times when she wanted to scrape the marrow from the bones of someone she intended to punish.”

How many women have shot someone just such a desiccating glare? Or dreamed of it, anyway.

In broad strokes: “No Knives in the Kitchens of This City,” translated by Leri Price, is about a cultivated family under two successive autocrats who despise cultivation. What these autocrats — first, Hafez al-Assad and then his son Bashar — value is conformity, docility and ultimately treachery; there are informers informing on informers informing on informers. “My mother told me that spies lived in the trees,” the unnamed narrator explains.

To survive such a government with your sanity and dignity intact requires living a “parallel life,” as the narrator often says. You must split off from the rhythms and doings of everyday Syria, in the hope that some small, lonesome part of your moral machinery remains uncorrupted.

The narrator of “No Knives in the Kitchens of This City” was born just a few days before Syria’s 1963 coup. He considers this timing a bad omen, a mark upon his destiny, and his solution is to keep his head down and his expectations low. His brother, Rashid, is a gifted violinist and lost soul. His sister, Sawsan, is a creature of wild excess — angry, sexual, mercurial. The narrator has another sister, too, Suad, but a disability takes her life prematurely.
It’s the narrator’s mother, though, who embodies the real terror, melancholy and desperation of Aleppo. Once a respected schoolteacher (she gushed to her students about Vivaldi, entertained her friends with English-style teacups), she spends her later years in an embittered state of disassociation. “My mother was like one of those women who never stopped chattering,” the narrator says, “even while yawning.”

Every character gets his or her moment in this book — some in the years before the 1963 coup, some in the near present, some in the decades in between. The central question for each is simple: How do you wrench meaning from such a dismal existence?

Some capitulate to the state’s demands. Others defy them and pay the price. Sawsan’s reactions are perhaps the most extreme, running the gamut of possibilities: First she joins the Baath Party and revels in her power; then she rejects it and dabbles in religious radicalism. (Her conversion involves a shady operation to restore her virginity.) But nothing, ultimately, can assuage the despair of this family or nation, especially when Bashar al-Assad takes his father’s place.

“He thought he would spend his whole life being desperate and afraid,” the narrator writes of his brother, Rashid. “He told me he wouldn’t wait until the grandson of the late President was ruling over us.”

“No Knives in the Kitchens of This City” meanders a great deal. At moments, it can be slow and hard to follow; its characters sometimes act in ways that make little sense, even by the erratic standards of human behavior in dictatorships.

But the sights, smells and horror of living in Aleppo come pounding to life in this book. The place, to me, is no longer an abstraction, and Mr. Khalifa clearly fears for its fate throughout. “Cities die,” he writes, “just like people.”

Sometimes sooner than you’d imagine. In your own lifetime, even, right before your eyes.