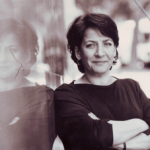 [1]Hoda Barakat was a guest of Chiasso Letteraria 2016: Seconda classe, in Italy, and was interviewed by Stefano Montefiori, for La Lettura, Corriere della Sera, April 24th, 2016. Below, excerpts of a summary of this conversation, published on the blog imago 2.0 [2].
Hoda Barakat, a Lebanese writer, after a period of great participation in events and discussions on the Arab world and its alleged features, decided to thin out her appearances in public, especially in the literary events currently focusing on the relationship between Europe and Islam in her second home, France.
In an interview with Stefano Montefiori of La Lettura, Hoda Barakat, who lived through the Lebanese civil war says that French writers and intellectuals seem to have lost their role. “The Parisians who are sitting at the tables of the bars and are afraid of being the next victims of a terrorist attack, like the one on last November 13th, have the right to be afraid. But intellectuals should have an opposite attitude, they should think with their heads not their guts. ”

Nevertheless Hoda Barakat decided to participate in Chiasso / Letteraria , perhaps because of the theme of the festival: the second class, referring both to the multitudes of second classes that are forming in the world (more and more distant from the first classes, ready to do anything to defend their privileges).

Regarding not being politically correct: “I do not like this tendency to say out loud things which we were ashamed of saying before. I recognise the merits of European progress, but do not like this reaffirmation of identity, the fact that you respond to fear with pride. The intellectuals have abdicated their role… Intellectuals do not feel more called to go against the current, following the opinion is easier… I decided not to participate more in this kind of talk shows and debates, because it is impossible to have a real discussion”.