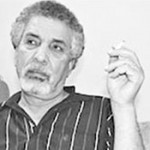 [1]Ibn Rushd Foundation for the Freedom of Thought [2] is an association based in Germany, whose members are from the Arab diaspora or live across various Arab countries. It takes its name after the philosopher Ibn Rushd (1126-1198), taking it upon itself to support free thought and democratic forces in the Arab world by offering an annual prize. The award is independent, funded by contributions from its members and donations from supporters, with no link to any political or ideological trends. The award’s topic change each year.

This year, the topic was the literature of prison. The works considered were to be written in Arabic, stimulate a general discussion about prison, repression and the violation of liberties, they had to contribute to the disclosure of the life conditions of political prisoners, and reinforce values of dignity and freedom in the Arab world.

At the moment, from the Atlantic Ocean to the Arab Gulf prisons screams of detainees are often met with walls of silence.  The lives of prisoners of conscience, political prisoners and people who speak up against injustice and occupation, are a harsh, intimidating and unknown world. Prison literature plays the role of a literary documentary. Perhaps reading the experiences of former detainees will offer a live memorial, that will help keeping the prisoners in our memories.

The first prize was awarded to Palestinian author Aisha Awde. Moustafa Khalifa and Ahamd Al Marzouqi obtained a special mention from the jury.