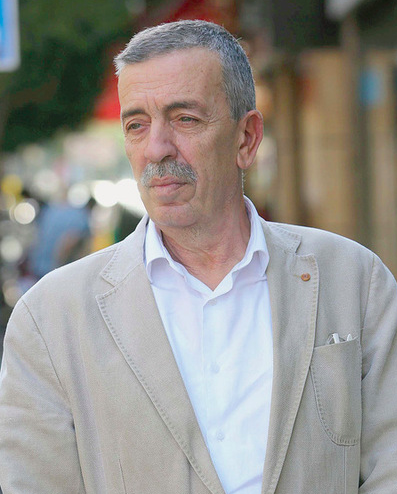 (…) Here we are again in this mainly Sunni port city in Northern Lebanon – too often overshadowed by the capital Beirut – for which the author confesses a passion. Yet he is born in Zgherta, a Christian Maronite stronghold, 8 km away. “A tough city that made war to Tripoli in 1975,” he recalls, referring to the start of the Lebanese civil war. Zgherta is dominated by two families, the Franjieh and the Mouawad, who gave both a president in Lebanon, one of which, Rene Moawad was assassinated November 22, 1989.

THE RISE OF ISLAMISM THROUGH TWO PORTRAITS
In Tripoli, where he taught French literature at the Lebanese University, Jabbour Douaihy sets his latest novel, and offers a portrait far from the cliché of Muslim cities. Of its past, it has retained some military sites, the city of trade and renowned cultural center that it was, with many religious institutions, schools of medicine and philosophy.

“But it’s been a long time that Tripoli is no longer a peaceful town”, he acknowledges. Tripoli, the pro-Nasser, became Palestinian with the advent of the PLO, was de-Christianized after the 1975 war, and lived the rise of the Islamic Unification Movement, Harakat al-Tawhid al-Islami. ”

The novel describes the rise of radical Islam through the portraits of two young men. Ismail raised in the poor “American” neighborhood, recruited by an Islamist preacher to commit an attack in Baghdad. His mother works as a maid for the father of Abdel Karim, an idle young man from a wealthy family, suffering from “melancholy”.

“I NEEDED TO MEET THESE YOUTH”
“Abdel Karim existed, says the writer. He was a notable son who wanted to be a dancer, but never was. He spent his time watching movies. I stitched around the character, but I do not remember when the reality has surpassed fiction. There are many people like him, with refined tastes who have studied and are not understood in this world. ”

He also met several Ismails, in these poor and explosive neighborhoods of Tripoli, known as Bab al-Tabbaneh and Jabal Mohsen. Places in permanent ebullition where even today pro-Assad and anti-Assad youths confront each other.

The writer knows this world. “I did not pretend to make a documentary, but I needed to meet these young people, to understand how a simple seller of onions in the souk of Tripoli may become an imam and exercise power through religion, he explains. I understood how this new identity could give them respectability. ”

“THERE ARE STILL POSSIBLILITIES FOR HUMANITY”

His novel describes the breakdown of the traditional elite and the irresistible rise of radical Islamism. Jabbour Douaihy remembers the 1970s, when he belonged to a circle of Christian-Muslim encounters: “There were already intellectuals who campaigned for” Justice in Islam. ” At the time, we did not take them seriously, but today they have multiplied. ”

The author’s optimistic nature prevents him for getting to a depressing conclusion. “Ismail is not totally under the influence of his mentor. I wanted to show that there is still a possible humanity in there. After all, this is Lebanon, a country where life is pleasant, despite all the threats that surround it. “