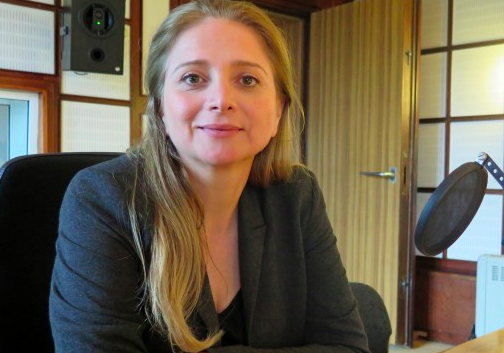 Everybody makes the terrorist organizationof ISIS responsible for the failure of the Syrian revolution. But the Syrian journalist and writer Samar Yazbek says that responsibility does not only lie with ISIS, but also in the inaction of the international community.

Samar Yazbek, who was just a guest at the International Literature Festival in Berlin (…), claims to the German radio that it is too easy to say that ISIS has stolen the revolution (…)

Frenzelk: “The Crossing” – Ms. Yazbek what have you experienced with these clandestine trips into Syria?

Yazbek: I have really seen a lot… I can summarize as follows: I have seen how Syria was destroyed from the sky by the bombings of the Assad regime, as the jihadist extremist groups spill inside the country, while civilians and civilian activists are still there and still fight.

Frenzel: Is there such a thing as a life in the Civil War, a normal life? (…)

Yazbek: It is very difficult to speak of a life.There is far too little food, there is often no electricity, people are bombarded continuously, life is just insanely difficult. But also, children no longer go to school (…) civil life can simply no longer take place. A new kind of life has emerged, a new way of life. The life of women has become really very, very difficult. Children take up arms and begin to fight. Men are killed. Brutality is rampant, and, of course, a large part of the population is psychologically completely destroyed. (…)

Frenzel: You mentioned ISIS, and the [German] book title says “the stolen revolution ‘. Who stole it from your perspective – the Islamists, ISIS?

Yazbek: No, you can not say so. ISIS is a result, a consequence of the situation and it would be too easy to say that ISIS stole the revolution. On the one hand there is the cruel brutality of the Assad regime, which has, so to speak wiped out everything.Then, there is the silence of the international community in the face of these crimes. Sectarianism has arisen through the intervention of Iran and Hezbollah. And of course violence generates violence. Finally, the borders with Turkey were opened and foreign fighters were able to flow into the country, and [in this context] ISIS was first created. These many jihadists who have come across the border have, then fought the activists. (…) the activists who have continued the revolution, they killed, arrested, expelled them. These jihadi groups have been financially supported, and all this under the eyes of the world community. The world has watched as they became increasingly strong, and they did not mind (…).

Frenzel: The opposition, the real, the original opposition to Assad is very weak. Many come to the conclusion: Better with Assad, better against ISIS (…). Is that a possibility, can a transitional government be held with Assad?

Yazbek: In my opinion, the idea that the governments of the international community fighting ISIS with Assad is absolutely unrealistic, it has nothing to do with reality. ISIS is a result of the incredible violence of the Assad regime. If you believe in a political solution as I do, you first have to eliminate the cause, and that is the Assad regime. That is: as a first step for a political solution, it is necessary to prevent Assad’s bombings (…)

Frenzel: What should the West do? (…)

Yazbek: It’s just a very, very complicated situation. One has to pay attention to several points, and there are many different interests are at stake. (…) [I mean] pressure must be exercised on Assad, in particular by its allies, Russia and Iran. The most important thing is for the bombing to stop. There must be safe zones for the population. Of course, the political opposition has also had talks with Assad, and it also needs ISIS and the other jihadist groups to be faught. The question is, however: Does the West really want to stop the war in Syria? That’s still not quite clear. In any case, there should be a step at a time (…). I as Syrian can only say that, of course, the fight against terrorism is a long struggle and will be a long struggle. It is important that Assad gives in, that he is forced to give in, that ISIS and the other groups are fought, and that there is a transitional phase, with a judiciary apparatus in which there are civil rights for the population. These are the first step towards a peace process.