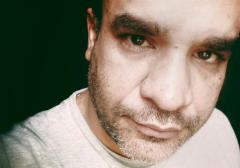 [1]Reviewlab [2], by Skyler Vanderhoof.
December 2014
Visit their website for the full story!

The Crocodiles by prolific Egyptian novelist, reporter, poet, and photographer Youssef Rakha, is, at the very least, ambitious.. Ostensibly this book is about the eponymous Crocodiles, an underground group of guerilla poets formed in Egypt in the 1990’s and active until the early 2000’s. Like Irving Welsh’s Trainspotting, or Ernest Hemmingway’s The Sun also Rises, this book isn’t really aboutthe surface material. This is a book about people, about human conditions and relationships.

The fact that the book takes place in Cairo during a time of public upheaval, or that poetry is heavily discussed, cannot change the fact that the book explores the three cardinal characters: Paulo the hunchback, Nayf the bitter cynic, and Youssef, also known as Gear Knob, the objective narrator.

For a book that is so slim, it’s secondary and tertiary themes cover vast swathes of ground: love, poetry, friendship, drug use, social responsibility, death, the passage of time, and political despotism. With subjects so countless, and with pages liable to the vagaries only a poet could possess, it is easy to find yourself thematically lost. In truth this book suffers from a bit of an identity crisis. At times it feels as if the book is about these boys and their relationships with married woman. Other times it feels like it is really about the influence of poetry on impressionable young men. For a brief few pages, especially when Rakha writes powerful denunciations like, “…young men were being scarred for life on Mohammed Mahmoud Street, then outside parliament and along Qasr Al Aini Street,” I even thought that what this book was about, at its heart, was a politically discordant Cairo—the map at the beginning of this book entitled “The Crocodiles Cairo” would lend credence to this claim.

But the truth is that the plot is not static and to try and trace a narrative arc is near-impossible. The only contextualization you need is that this is a Künstlerroman in the autobiographical fiction format. Time and geography jump often; subject matter varies; plot is not event-centric, it’s characterization-centric. Enjoyment is completely predicated on one’s ability to roll with the literary punches, of which there are many.

You would think that meaningful exploration of all of this subject matter in such a short piece of literary fiction would be a near-insuperable undertaking. Thankfully, the structural novelty of the book allows Rakha to punch far above his weight, or in this case, page limit. For example, in lieu of chapters the novel is told in numbered, poem-like paragraphs reminiscent of short prose-poetry cantos. Often there are as many as five or six of these little cantos on a single page and frequently, time and subject matter differ from paragraph to paragraph. This non-linear format, combined with Rakha’s distant first-person narration allows him to distill great beauty out of a sparse few sentences. It is these heightened moments that carry the book:

“Idealists are often less moral than non-idealists in the end, just as the pious are less faithful and the politicized less orthodox in their ideology. Similarly, romantics—I think—can be immeasurably harsher than others. Their romanticism’s a veneer; deep down lies a scorn for life and a ruthlessness; a quite terrifying ruthlessness these romantics have.”