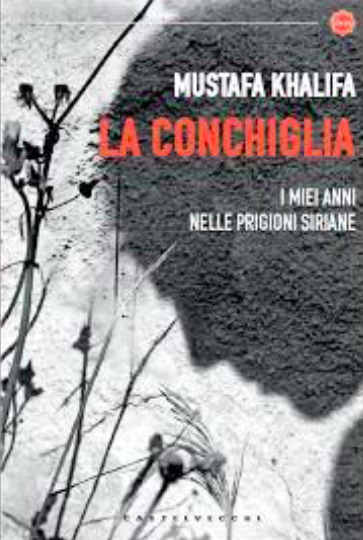 “Chilling description of torture, as well as of animal conditions of survival for hundreds of people massed in large rooms, similar to Dante’s circles. The Shell, is a diary that results of “mental writing”, i.e. the daily repetion in the ribbon of memory, the salient episodes of the 13 years spent in the banality of evil.

Only for this one act of defiance, this political novel places Khalifa – and his sharp, poetic writing – next to “A day in the life of Ivan Denisovic” by Solzenicyn, or to “My prison” by Silvio Pellico.

An adventure into the brutality of the regime and how far human psychological resistance can go: a challenge when death is preferred over surrender to the torture of the secret service when, and when after ten years of absolute silence on behalf of the jailers, an official investigation is instigated thanks to the “involvement of a very influential uncle”.

The savage brutality of the regime – the premise and partly explanation of the atrocities of the present civil war – is one face of hatred. The other face is that of the Muslim Brotherhood, the members of which are locked up in the desert prison: after months of silence and apathy, Khalifa’s revealing that he is of a a Christian family and an atheist by conviction, is sufficient to isolate him as a pariah.
…
In the tragedy of executions and deadly epidemics, his decisive help of a patient provides him, at least in that big room, the recognition of a human being.

The newfound freedom in 1992, after new abuse and despite refusing to sign a thank you letter to the Rais, is a deep wound: the shell still haunts the soul, and only allows you to spy through the cracks. It is impossible to forget, inconceivable to start over. Remaining strong and authentic, Mostafa Khalifa’s is a scream from the silence of the prisons of the regime, a cry to be heard with the hope of freeing the future.”