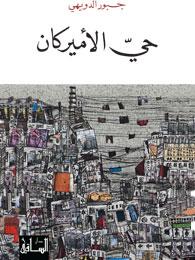 [1]Mishka Mourani says “American neighbourhood” is his “best novel yet”:

“Abdel Rahman Bakri comes out of the bedroom in his bare feet. He has looked in vain for something to shield his feet from the freezing floor. He lurches toward the bathroom to answer the call of nature; it is growing increasingly urgent with the passing of the years. He pauses. As has become his habit since he bought the color television from which his wife is convinced he will not be parted until death, Abdel Rahman scans the landing between the bedroom and the bathroom under the stairs for the remote control, his left hand holding his striped nightgown high up against his thigh in response to the urgency that has taken hold of him.” (p.5)

“She negotiates the sidewalk through her senses: a clutter of garbage then a puddle of water, then the smell of boric acid, of which the old man sitting at the door of the soap factory is heedless, followed by the redolence of the spiny fish in the basket of the hawker, until she is assaulted by the call for noon prayer, which suddenly emerges from the bag that hangs from her shoulder.” (p.13)

The opening pages of The American Neighborhood (Hayy El Amerkan), with their cinematic descriptions, carry the mark of a confident and mature writer. Jabbour Douaihy’s discerning use of the present tense enhances the immediacy of the action, and his narration is both amused and bemused.

Through the use of a third person omniscient narrator, the writer adopts a style that is clinical, with incisive observations, yet the writing still manages to border on the lyrical, as if the author is struggling to restrain his affection for the bedraggled neighborhood and its inhabitants.

The key event of the novel is a non-event: the decision of Ismail, a young man from a Tripoli ravaged by poverty and ignorance, not to blow himself up on a suicide bombing mission to Baghdad. The novel explores the growth and effect of fundamentalism and its ability to dehumanize and manipulate circumstances. It also points toward why fundamentalism is unsustainable. As grim as the present may be, hope will prevail.

The novel affirms that blind fundamentalism is not the end of a city, but rather a stage, and that the besieged city is as strong as the dilapidated fort that stands over it, broken and damaged yes, but standing nevertheless. Standing and bearing witness, and waiting for better times.