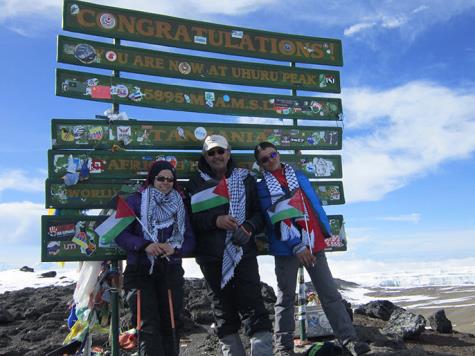 [1]Ibrahim Nasrallah for The Palestine Chronicle [2], a few weeks before their departure, December 17th, 2013.
With You They Will Climb The Mountain – With Them You Will Reach The Summit

More than ten years ago I wrote my poetry collection “The Mirrors of Angels” about a Palestinian child who was killed by an Israeli tank shell in Gaza. The whole collection dedicated to this child was an imaginary biography of a four-month-old baby who was not given a chance to walk due to oppression, injustice and death. I wrote it trying as much as I could to create a text that would not allow them to kill her once more.
This collection left a deep impression inside me; it was difficult, tiring and painful for me at an emotional level, and made me think then that I would never write poetry again. The suffering I went through with each word of its thirty-three poems was enough to destroy a poet’s heart.
Some months ago I met the Palestinian champion of mountain-climbing, my dear friend Suzanne Al Houby, the first Arab woman to climb and summit Everest. She told me of a project to organize a journey to the summit of Mount Kilimanjaro in support of the Palestine Children’s Relief Fund. This society has treated thousands of Palestinian children who were suffering from illnesses or among the children that the Zionist occupying forces have maimed, blinded or severely injured.
The aim of the society which was established during the first Palestinian Intifada, which was accompanied by hooligan attacks on the children of Palestine, is to treat those children locally and to transport difficult cases for necessary treatment abroad.
I immediately felt that this noble journey was important and necessary. But when I learnt that the volunteers would be accompanied by Palestinian child amputees, on their way up the fourth highest summit in the world, I realized that the project is of an even greater importance and necessity. I was overcome by deep feelings of sadness and pride at the same time. Here are some Palestinian children who will carry their message and send it to the entire world from the summit of this mountain. They will be telling the Zionist army that crippled them, that they are not defeated and will not be defeated. They will prove, with their remaining limbs, that they are able to tell humanity: “We are the children of this life, the children of a people who have been fighting for their freedom for more than a hundred years and who will not be defeated.”
Suzanne explained to me that the summit is six thousand meters high and that to reach it the participants have to walk the distance of eighty kilometers under various weather conditions. The weather that the surrounding valleys enjoy will soon give way to more grueling conditions with every step they take on their way to the snowy summit.
After a while I returned and spoke with Susan about the subject once more. She told me that three children had signed up to participate, but one of them had had to withdraw. This made the participating children two: a Palestinian boy called Mutussam Abu Kirsh from Gaza and a Palestinian girl called Yasmeen El Najjar from Nablus.

Somehow I recalled these lines from my last poem in the collection The Mirrors of Angels:

My God, it seems that these children will be doing what the martyr Iman Hajjo could not do at four months old. They seemed to be making the wishes of the poem come true with their determination, faith, sweat and power of spirit. They will hold Iman’s hand and the hands of thousands of children in my Palestine and all over the world as they walk to the summit.
In this way I found myself offering to Suzanne as a volunteer.

I could have stopped at moral and economic support, without physically joining this journey. But I felt that I cannot leave Mutussam and Yasmeen to climb alone and that I have to continue Iman’s biography by helping her climb the mountain she wished to climb in the poem. I could not let my poem climb the mountain alone without its poet.

When we spoke about the details I discovered that it is not easy. I have to train a lot in order to be able to climb and to help others who might need helping. I also discovered that the costs of the journey are quite high. This is how my participation is going to be, like the rest of the volunteers who took care of all their own expenses. We will climb the mountain and do what we can to collect contributions for this project. The participants dream of gathering a million dollars for the Palestine Children’s Relief Fund though personal pages that the society has set up for every volunteer. Every one of us volunteers will try to gather the greatest amount of donations through his\her page and the contributions will be transferred straight away by the volunteer into the Society’s account.

The society has presented Mutussam and Yasmeen with the necessary treatment, as well as thousands of other children. The two of them realized with their deep human insight that their turn has come to present help to other children, as there are new victims every day, and Palestinian children are queuing for treatment locally or abroad.

We still have a few weeks until we climb the mountain. The journey starts on 17th January 2014 but I already feel this deep change that affects me as I prepare myself to accompany those two heroes to reach the top. I prepare myself to get to know them more, to get to know a generation of children who face the efforts of the Zionist army with all its destructive weapons to take away their childhood, to stop them playing and to block all paths of hope that their mothers, grandmothers, fathers and grandfathers have paved for them. I also look forward to getting to know a number of noble women and men, Arabs and foreigners, who will join from various continents.
Therefore I look up to you dear friends, wherever you are, to contribute donations to this project. Every sum, no matter how much it is, is necessary and will be a step that Mutussam and Yasmeen will take to the summit. Other Palestinian children too will take a step towards their freedom, moving out of a dark reality of hopelessness to the sun of freedom and hope.