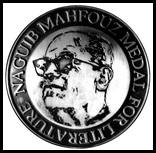 [1]Khaled Khalifa was awarded the Naguib Mafouz Medal for Literature [2] on December 11th 2013.

This prize, awarded since 1996 is a major award for contemporary Arabic literature.

The award is presented annually on December 11, the birthday of Nobel laureate Naguib Mahfouz, by the President of the American University in Cairo in the presence of the Minister of Culture and many other prominent leaders of Egypt’s cultural life.

Exceptionally, and for the first time, the winner of the prize was unable to receive the award in person. Khaled Khalifa was not given permission to leave Syria by the authorities.

The Naguib Mahfouz Medal for Literature is awarded on the basis of the literary excellence of the work as agreed by a panel of judges. The Award Committee meets in early summer to establish a shortlist of nominees and in the fall the judges make a final decision prior to the award ceremony on December 11 of every year. Previous winners are: