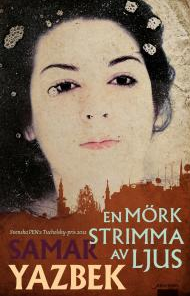 A year ago, the Syrian writer Samar Yazbek Swedish PEN Tucholsky Prize (awarded to persecuted and threatened writers) for her portrayal of the war in Syria.There were none of her books in Swedish then, but now comes the first. Translated as “A dark streak of light” (Cinnamon) by Naila Saleem, it is a story about sex and power.

It is not difficult to understand why Samar Yazbek angers the regime in Syria. A dark streak of light is certainly not the reason she fled their home country, nevertheless, this fictional narrative is a biting criticism of Syrian society. A dark streak of light is a love story where the lovers are a married rich woman and her young poor maid. The gap between the classes is not the only problem with this relationship, but also the fact that it is a homosexual affair, forbidden in Syria.

The relationship comes to an abrupt end when the older woman, Hanan, becomes aware that the young woman, Alya, is the mistress of her husband, whom she detests. Hanan is furious and throws Alya out in the middle of the night. This breakup is where the novel begins. After having thrown her out that night, Hanan experiences severe anxiety over the realization that Alya is no longer at her side. What is left to live for, she asks herself. As for Alya, she has to face the fact that she now she must return to the slums.

Samar Yazbek’s prose consists both of a straight narrative and symbolism, such as the recurrent nightmares Hanan is haunted by. She dreams that her body is deformed, and includes five arms and three breasts. Yazbek explores in an interesting manner the question of power, of who possesses it and of how it can change sides. The novel is poignant, especially the depictions of Alya’s upbringing in Damascus’ slums(…)