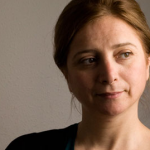 [1]Viewpoints: Five writers reflect on Syria and the Arab Spring
With Syria dominating the headlines, the BBC World Service programme Newsday invited five writers from Arab countries affected by revolution to reflect on what has happened in their homelands – and what the future might hold.

” I don’t think about who I am these days.

We are not the people we were heading towards becoming.

We are still on our way there, with no choice but to be pulled off course by humankind’s brutality.

All of a sudden, I found myself beneath the guillotine wherever I turned.

Having for so many years thought myself capable of claiming my freedom as a woman – despite facing various forms of oppression – I was being stripped of my sense of self, falling repeatedly from the sky down into the devil’s abyss.

The extent of the barbarity that exists in this world is beyond anyone’s imagination.

What I have seen I cannot describe. Reality is more gruesome than anything the mind can conjure.

I saw the dismembered hands of children visible among the rubble. As plain as that – the hand of a four-year-old girl appearing from beneath the debris of a house that Assad’s aircrafts had pelted with explosives.

I watched the girl’s grief-stricken father, his body coated in dust from head-to-toe, as he sat on the pavement close to the horrific wreckage that was once his house – now a pile of stones.

He watched the rescue team as they searched for his daughter’s body, smoking a cigarette in silence.

The man lifted a hand to his forehead as tears streamed from his eyes. In that same moment I placed my palm to my chest, my heart nearly stopped. I felt as though my fingers were piercing straight through my body and exiting my ribcage.