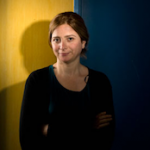 Throughout the on-going conflict in Syria, women have suffered widespread abuse at the hands of Presidents Assad’s tyrannical regime. But for many, it has only strengthened their resolve. In this week’s Grazia, we talk to 22-year-old female sniper Delar – one of a growing number of women fights in Aleppo – about why she decided to join the revolution.
For Syrian-born writer Samar Yazbek, this display of courage by women is an indication that a feminist revolution will one day take place in her country.

Yazbek grew up as part of the Alawites, a mystical Islamic group of high social standing that boasts the Assads amongst its ranks. Her decision to join the rebel protests in 2011 was particularly controversial, and her experiences of living in hiding as a result formed the basis of her best selling book, A Woman in the Crossfire. This year, her novel Cinnamon was translated into English to widespread acclaim. But as the situation in Syria continues to escalate, so Yazbek is turning her attention once again to documenting the facts.
Writer Nathalie Olah caught up with the self-effacing author from her new, undercover residence in Paris…

You’ve been forced to move country as a result of your writing. Why did you choose to risk your own safety to tell your stories?
I have not chosen the risk willingly; the reality of what was happening in Syria needed to be written about. I used to go on the streets daily, see with my own eyes what was happening and then write. I never thought it was possible to keep silent about the brutal actions of Assad’s followers. In the early months of the revolution, the Syrian people were pacified and asking for a democratic civil country, but the Assad regime’s reaction was brutal and criminal. Unfortunately, the brutality of the Assad regime affected everyone and its secret service, shabiha, and the media, practised crime at the same pace. They all wanted me to keep silent about the truth and falsify the events, but that was impossible for me.

Is fiction ever as effective as non-fiction in relating tragic events?
This is so complicated. At times of difficulty and tragedy, I look at events as if they were imaginary and at myself as if I were a fictional character, which gives me strength. Before the revolution I used to say that imagination is stronger than reality. At present, I have changed my mind.  The Assad regime committed the most horrible crimes that one might imagine to supress the revolution:  crimes against children, women, the elderly, demolishing cities, destroying monuments and burning land. The regime did all that to change the Syrian society into one that is saturated in bombs, violence and sectarianism. It’s become a well-known saying: ‘Either Assad stays or we will burn the country’.

Have you suffered trauma as a result of your treatment at the hands of the Assad regime, or as a result of what you have seen?
I would say that I, like so many Syrians, simply wasn’t given the opportunity to think about how to deal with it. We still are living the pain and the shock and we are still fighting in order to get rid of Bashar al-Assad. I have seen all the tragedies of the Syrian mothers and children and realised that what I suffered cannot be compared to the loss of children, homes, security and the loss of life itself. My suffering was and still is much less than that of most Syrians.

Are you still able to help the Syrian cause from abroad or do you feel frustrated?
I actually feel frustrated, but this does not make me feel weak or stop my desire to belong to the revolution in spite of everything. I still do so many important things outside and inside of Syria. I founded a development organization in Paris (Syrian Women for Human Development), through which I started small projects for women in disaster areas and oversee the opening of children’s schools. Now I have just started writing my second book about Syria.

A Woman in the Crossfire is brutally honest. Was it important for you that people who only see statistics and news footage, began to feel true sympathy for the people of Syria?
Many people all over the world do not know what is exactly happening in Syria, and of course that is not their fault. But it is so important that we write about the ideas of truth, justice and freedom. I have faced so many problems doing that and lots of them, namely the ones who side with the criminal Assad regime, wanted to say that what I write is not true.

How do you feel about the way the West has dealt with the situation in Syria?
The Syrian revolution highlighted the moral failings of governments all over the world. They all stood looking at the Syrian massacre in total silence. Bashar should be removed quickly, but foreign governments won’t work with us to achieve that. There is a game of political interests being played by the governments of the world and for them it is much more important than all of the human and ethical values at stake.

You have spoken about a feminist revolution post-Assad. What do you think this will look like?
Syrian women were among the first to participate in the public resistance of Assad and they are still participating in the revolution.  I think women are the ones who will pay the price of what’s happened first – they have already been abused by Assad’s followers in civilian areas and in refugee camps.  Hence why I say that, up to the day Assad falls, we should strive to make sure women are not deprived of their rights and are allowed to participate in political, social and economic life. This is because I am worried of the emergence of a radical Islamic movement, not a moderate one, which will have a negative influence on the Syrian woman. Our mission is to make Assad go and then to crush religious fanaticism and radicalism and this will take a very long time. Our road is very long.