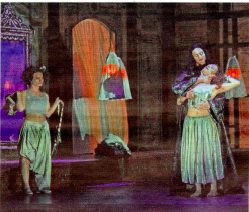 On Monday April 30th, was held an exceptional Première for the Comédie Francaise. Normally, the vessel of French national theater reserves its premières to the Richelieu room, in Paris. But that week, it is in the heart of Marseille – at the Gymnase theater – that the House of Molière revealed its most recent creation. And not the least: Rituals of a metamorphosis, by Syrian playwright Saadallah Wannous, starring Denis Polyades and Julie Sicard. This play happens to be the first play translated from the Arabic to ever enter the French repertoire.

The symbolism is striking given that the play, which was written in 1994, in the time of Hafez El-Assad, clearly announces what we today observe on either side of the Mediterranean. One thinks of the Arab spring, but also, if one carefully listens to Wannous, one thinks of all the sexual and financial scandals which happen at the same time a little more to the North.