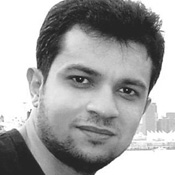 [1]Mohammad Hasan Alwan’s book Beavers [2] is shortlisted for the International Prize of Arabic Fiction [3], also known as the Arab Booker!

Sinan Antoon, Jana Elhassan, Mohammed Hassan Alwan, Ibrahim Issa, Saud Alsanousi and Hussein Al-Wad are announced as the six authors shortlisted for the 2013 International Prize for Arabic Fiction. Their names were revealed on January 9th 2013 at a press conference held in Tunis, Tunisia, by the previously anonymous Judging Panel, chaired by the Egyptian writer and academic Galal Amin.

This year’s shortlist reveals a number of varied thematic concerns, which lie at the heart of the Arab reality of today. These include, amongst others: religious extremism; the lack of tolerance and rejection of the Other; the split between thought and behaviour in the contemporary Arab personality; the Arab woman’s frustration and her inability to break through the social wall built around her; the laying bare of the corrupt reality and hypocrisy on social, religious, political and sexual levels.

The 2013 Judging Panel was also announced during the press conference, held at Tunis’ prestigious Municipal Theatre.

The Judges are: Egyptian academic and writer Galal Amin (Chair); Lebanese academic and critic Sobhi al-Boustani; Ali Ferzat, who is head of the Arab Cartoonists’ Association, and owner and chief editor of the independent Syrian daily newspaper Al-Domari; Polish academic and Professor of Arabic Literature at the Arts College of the Jagiellonian University of Cracow, Barbara Michalak-Pikulska, and Professor Zahia Smail Salhi, specialist in Arabic Literature Classical and Modern and Gender Studies at Manchester University.

The six shortlisted titles were chosen from a longlist of 16, announced in December 2012. The novels were selected from 133 entries from 15 countries, published in the last 12 months. The shortlisted novels are, in alphabetical order:

I, She and Other Women, Jana Elhassan (Lebanese), Arab Scientific Publishers

The International Prize for Arabic Fiction is awarded for prose fiction in Arabic and each of the six shortlisted finalists receives $10,000, with a further $50,000 going to the winner. It was launched in Abu Dhabi, UAE, in April 2007, and is supported by the Booker Prize Foundation in London and funded by the TCA Abu Dhabi in the UAE, who were announced as the new sponsor of the Prize in September 2012.

The winner of the International Prize for Arabic Fiction 2013 will be announced at an awards ceremony in Abu Dhabi on 23 April 2013, on the eve of the Abu Dhabi International Book Fair. An English translation of the winning novel is guaranteed for the winner. All five previous winners of the Prize have secured English publishing deals for their novels.