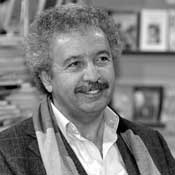 [1]This is an excerpt of the original article written by Benjamin Hollander for Warscapes [2], in January 2013.
Visit Warscapes for the complete review.

Time in Nasrallah’s novel spans multiple generations in one location: the village of Hadiya in a Palestine under 19th and 20th century foreign domination. Flipping the Middle Eastern script as most have come to know it, the novel concludes where our perceptions of the region often begin: in 1948 with the creation of the State of Israel. Unlike Palestinian writers Emile Habibi and Ghassan Khanafani, upon whose classic work he builds, Nasrallah has said that he wants to voice the little known conditions of life in Palestine before the creation of the State of Israel. The measure of the greatness of this book is its humility in approaching a people’s vast experiences and rituals across this long stretch of time between Ottoman and British then Israeli occupation, as Nasrallah deftly narrates this community’s character within a specific locale and around the acts of the novel’s hero, Khaled, whose reflections and deeds ennoble the lives of each successive generation. That Nasrallah’s writing evokes this epic grandeur in discrete, alluring, lyric chapters, one story seamlessly weaving into another, is even more compelling: the long novel enlightens us in flash fictions which illuminate each other and sustain our attention.

Through stories that at first seem innocent enough – the taking of a bride, the building of a monastery, the choosing of sheep for slaughter, the bond between Khaled and a white horse whose beauty and strength is compared to “a full moon that never sets” – Nasrallah manages to travel back in time to shape an environment of characters and scenes free of stereotypes and assumptions which a contemporary Westerner might too quickly bring to the table through habits of reading overly contextualized by the arch-narrative of the Israeli-Palestinian conflict post 1948. Drawn into the late 19th and early 20th century life of an Arab community rarely encountered in literature about Palestine, the reader momentarily suspends belief in his own pre-suppositions about the region and engages events which happen as and not after political and social conditions are lived and articulated. Nasrallah chronicles captivating stories of characters whose lives intimately cross on multiple, surreal levels: heroes who transform into the spirit of their horses, horses who assume the roles of loved ones come and gone and searched for and resurrected in another life which is this life, loved ones who are martyred in their struggle against invading armies. These stories define and honor the discipline of a culture, so that the characters in Nasrallah’s novel often act in the service of the words his narrator cites: “According to an Arab saying: there are three types of service that aren’t demeaning: service performed for one’s household, taking care of one’s mare, and waiting on a guest.”

But these are not stand-alone vignettes nor do they lead into a novel representing a people’s fixed cultural code, since political realities surface which must be increasingly faced, and the characters (and readers) must adjust over time. For example, at the start of Nasrallah’s tale we are drawn into a meeting between two village elders, one of whom, Abu Salim, is being asked by Khaled’s father to send his daughter far from home to marry Khaled., “We were afraid,” Khaled’s father says, “you’d say that you weren’t prepared to send [her] far from home.” And Abu Salim responds: “This country is as big as one’s heart…Nothing in it is far away, and nothing is foreign.”

The deep, wrenching irony here is that while the country may indeed be “as big as one’s heart,” in this particular time and space under Ottoman rule, as in 2012, everything is absorbed by the animosity of the foreign, since the land is perpetually occupied by outside entities. Thus, as the novel evolves, chapters are more apparently devoted to how Humankind behaves in this fierce struggle to hold the land over time: villagers waiting for Arab rescue armies which fail to rescue them from the British, resistance fighters bringing down their occupiers, village lawyers cleverly making the case for the existence of “a village with a history,” which “existed before the country was divided into districts, and continued to exist thereafter.”