By Neil MacFarquhar for The New York Times [1]
Published on November 23, 2012
Photo by Michael Appleton 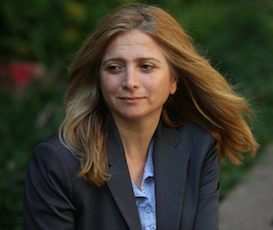 [2]Marching in antigovernment demonstrations was bad enough. But what made this a truly appalling betrayal in the officer’s eyes was the fact that Ms. Yazbek was among the scarce prominent Alawites who had broken publicly with the government.

Starting in earnest in 1970, when Hafez al-Assad grabbed the presidency in a coup, the Alawites, adherents of an offshoot of Shiite Islam, have wrested Syria away from its historical Sunni masters. They could lose everything if the Sunnis reclaimed power.

“You are a black mark on all Alawites,” the officer spat out at one point. He eventually unleashed two muscular goons who dragged Ms. Yazbek through a series of basement torture cells as a dire warning.

In the first, she said, three half-naked young men hung suspended by their wrists from the ceiling so that their toes barely scraped the ground. “Blood coursed down their bodies: fresh blood, dried blood, deep wounds carved all over them, like the strokes of an abstract painter,” Ms. Yazbek wrote in her newly published diary of the Syrian revolution’s first four months, “A Woman in the Crossfire.” “Suddenly one of the young men sluggishly tried to lift his head, and I saw his face in those dim rays of light. He didn’t have a face: his eyes were completely shut. There was a blank space where his nose should be, no lips.”

Ms. Yazbek, 42, collapsed, only to be yanked to her feet to continue the butchery tour, which competes for the most harrowing day detailed in the book, a rare early chronicle of the revolution from inside.

In both the book and in life, Ms. Yazbek, a novelist, oscillates between embracing the Alawite label and rejecting it, loath to paint the uprising in sectarian colors. It is a common sentiment among the limited number of Alawites who have publicly joined the revolution.

“I had never cared whether I was an Alawite or not,” she said, speaking in Arabic over coffee in a Midtown Manhattan hotel. “It was like someone saying you had blue eyes.”

Embracing the peaceful protest movement that began in March 2011 was rare among the minority Alawites, who constitute about 12 percent of Syria’s population of 23 million. The official narrative of the uprising, after all, holds that Sunni Muslim terrorist gangs imported from abroad are bent on toppling the government.
Nevertheless, Ms. Yazbek said, “I started to say I was an Alawite and I was with the revolution.”
It was not the first time she had played the contrarian.
Ms. Yazbek, who has the fair complexion of many coastal Syrians, was born into a prominent family whose fortunes had started to recede after her grandfather voluntarily distributed his considerable land to the peasants who worked on it. (A distant relative married Osama bin Laden.)
One of five brothers and three sisters, she ran away from home at 16 and married at 20. She divorced two years later, taking her toddler daughter to Damascus. She was determined to fight for women’s rights, she said, “to combat their status in the Arab world.”
EVENTUALLY she produced nearly a dozen books, five of them novels, and last month she was given the PEN/Pinter International Writer of Courage award. The authorities banned several. She broke taboos by writing about lesbian love, and used fiction to explore the Alawite experience.
One ambitious novel detailed an affair between an actress and a senior officer, both Alawites and both thinly disguised from real life. Among other plot twists, the two determined that they had been lovers numerous times over the centuries. Alawites believe in reincarnation, unlike most Muslims.
Even before the revolution, she was suggesting that the Assad family’s rule had beggared Alawites. She was used to the ire that that brought her personally, but she was unprepared for the bile suddenly directed at her family after the revolution began.
Leaflets calling for her death were spread around the coastal Alawite heartland, including in Jableh, her hometown, near Latakia. A teacher yelled at her niece that her aunt was “a whore.”
Ms. Yazbek eventually accepted that her family publicly disowned her for their own preservation. But she could not bear threats against her daughter, now 19, nor the tearful scenes as her frightened child tried to prevent her from going to more demonstrations. But Ms. Yazbek was determined to become a chronicler of the peaceful protest movement. She did so at great risk, playing dumb at times to talk her way past checkpoints, for example.

The book describes fateful confrontations in painful detail.
Early on, a young demonstrator right next to her was shot dead by a government sniper. “I knew it was an oppressive regime,” she said, “but I was initially psychologically shocked to see people being killed in front of me.”
She was astonished at how quickly security forces materialized to beat demonstrators senseless. “I never thought that murderers could just sprout up out of the streets like trees,” she wrote. “How did the security services make people so savage?”
She relied on Xanax to sleep. She moved apartments in a naïve attempt to escape the secret police. Walking down any street, she realized that she was constantly scanning the roof line for snipers. She mused that her life was a more realistic novel than she could ever write.
She often felt lonely. “I am just a woman in this little world living alone with her daughter,” she wrote. “How narrow this place is for my soul. I can almost reach my hand outside of it and touch the sky.”
The diary ends in July 2011, when she fled to Paris.
SHE has since sneaked back into northern Syria, however, provoking fights with friends.
“I told her that she was just showing off,” said Rania Samara, her French translator and a friend of two decades. “I asked her what was she trying to prove, that she was still part of the fight, risking her life to respond to people who said she should have stayed?”
Ms. Samara said she called her daily for about 10 days. “I told her that she was crazy, that she should not take the risk, that she had a daughter and that I would not be responsible if anything happened,” she said.
Ms. Yazbek got angry, but would not be dissuaded. “She has a very clear idea of what she wants to do and what needs to be done,” Ms. Samara said. “She is courageous and sincere. Everything she does, she does with conviction and heart.”
But her emotions run raw. In her opening speech during a seminar at the International Peace Institute here, she cried as soon as she started talking about the resilience of the Syrian people, despite the ghastly toll.
Like many Syrians, she faults the West, accusing it of a moral failure for not interceding. She said the West had not acted because Syria lacks oil and Israel wants to see it shattered.
She dismissed fears over who might one day control Syria as a flimsy excuse. The people running scores of the local coordinating committees that organized the uprising will emerge as the next generation of political leaders, she said, but right now they are too busy surviving to worry about the transition.
“We want democracy. After all this heroism and after all this chaos, the Syrian people deserve that much, deserve to live in a way that is just and right and free,” she said, tearing up again at the end of the interview. “What they have experienced is a small price to pay for that goal.