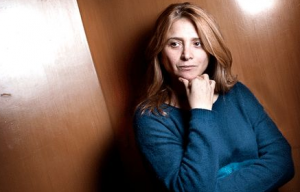 As soon as the Syrian uprising erupted against the Assad regime in March 2011, Samar Yazbek travel around the country to describe the regime’s brutality and listen to people who have suffered sieges, bombing and shelling during the mass demonstrations against the dictatorship that ruled for 40 years. She, who previously made a name for herself for having violated social taboos in her novels, now became an active witness to the Syrians rebelled against the Assad regime.
Samar Yazbek is alawit like the Assad clan. But most Alawites began to see her as a traitor. Leaflets were spread with coarse slander and death threats against her. She could not got to her hometown of Jableh on the Mediterranean coast.
Soon, she was also a peeve for extreme Sunni Muslims, the Salafists. Samar Yazbek represents what Sunni extremists hate: she is a feminist, an independent and secular professional woman. The irony is that when she was growing up, most of her friends are Sunni Muslims. First, in high school, she began to understand the difference between Alawites and Sunnis.

How she came to be in the middle of this crossfire, she describes in diary form in the book “In the crossfire”. There is poetry in her language, but the details are sometimes so intolerable that the reading needs pause.

-‘Five times, I was arrested’, says Samar Yazbek when the photographer Dan Hansson and I meet her at a coffee shop in Stockholm in connection with the award.

She describes herself as “constantly afraid”, but when I objected that only the fearful can be truly brave, she nods approvingly.
Samar Yazbek has seen hell, when the security service, Mukhabarat, grabbed her, blindfolded her and took her to the torture cells that smelled of blood, piss and feces. There, she saw how young incarcerated men in their 20s hung from their hands, which were secured in metal shackles. Their toes were just touching the floor.
She has slowly learned to recognize the men in the security services and the regime’s brutal henchmen shabbiha in their eyes and their shoes.

-“One time when they arrested me, they wanted to instill fear in me and make me silent. Another time they tried to get me over to their side.”

The Assad regime has no need to hide her assault, she says. On the contrary, it uses its ruthlessness to show who’s boss, also for the world.
The anxiety from the regime’s henchmen would unsettle her daughter, something she describes in her book so the reader knows it in detail. When I ask how her 18-year-old daughter is doing today, in exile in Paris, tiling can be heard in her voice.

-“The question makes me cry. As a mother, I tried to protect my daughter from danger. We had no choice, we had to leave Syria. She is safe now, but it has been very difficult.”

Now she writes a new book, while she works to strengthen children and women’s rights inside Syria.

-“We have an organization to strengthen the rights of women. We organize small projects to help women economically. We need to strengthen them. The countryside is ruined and women who become single heads of families are having a very hard time.”

On July 3rd, 2011, the revolution had lasted for almost four months, and when it still wore the marks of civilian resistance, she wrote: “This is a revolution; no sectarian war, and my voice as a writer and journalist have come out in support of the rebellion, no matter what it costs. ”

Today resistance is largely military. The military defectors who formed the Free Syrian Army is a soluble cohesive. Besides them there are also extreme Sunni Muslims with a sectarian worldview. These Salafists are in many ways Assad regime’s perfect opponents. The regime thrives on fomenting sectarianism and instills fear among minorities such as Christians and Alawites, says Samar Yazbek.

-“The regime has killed many Christians who have been for the revolution. Although there are sectarian tensions in the rebellion, I would still call it a revolution. It is not a sectarian war and not a Sunni revolution.”
“The regime of resistance has become divided into a peaceful and a military branch. That is the people’s choice, she emphasizes.”

It’s the result of the regime’s barbaric oppression of people, bombing their villages and towns, attacks on children and women. When peaceful protesters mowed down, when people are arrested, there is no alternative. People were forced to take up arms to protect their homes and families. But it is clear that it has created problems.

-“But if it drags on before the regime falls and if the Syrian people extradited to the regime’s killing machine, I fear that fundamentalists will be a real problem”, says Samar Yazbek.