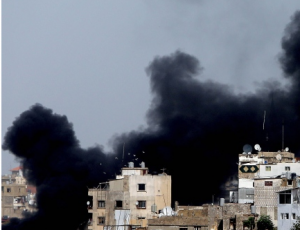 [1]Interview by Karen Kruger for Frankfurter [2]
Published on October 29th, 2012

The writer and literature professor Jabbour Douaihy is one of the foremost intellectuals of Lebanon. He wants to investigate the violence that shook this country again and again, by literary means. For decades, his family was involved in a blood feud that in the fifties, fell in one day twenty victims. The events of that time has Douaihy processed in his novel “June rain”. By mail, he gives me his phone number. I called.

Mr Douaihy where I get you now?

I’m in the car and just went out of Beirut. Sorry, there was a traffic jam.

What is the situation there? After the funeral of the murdered intelligence chief Al Hassan, it looks as Lebanon stood back from a civil war.

The situation is tense. There is something in the air, which is not good, everyone feels it. There are more soldiers in the city than usual, and sometimes you can hear gunshots. But the people in Lebanon often had ample opportunity to get used to at such situations. If there has been an attack, then we know that there will be a next. We live between two attacks.

Maybe so. Nevertheless, life goes on as usual. The shops and streets are full, the restaurants too. Beirut celebrates life, because you never know how long it will last.

It is said that the Syrian government was behind the assassination.
Especially the people who supported the struggle of the Syrian rebels against Assad believe it. Lebanon was under Syrian occupation, in 2005, we freed ourselves. Some people see a similarity between the uprising against Assad and the former Lebanese liberation movement. Hizballah of course disagrees.

It supports indeed Assad.
Yes, they send weapons and fighters to Syria.

And what do you think?
Well, it’s not the first attack, which our neighbor carries here, and it will certainly not be the last. For thirty years, Syria interfered in Lebanese affairs. The regime knows only one mean of doing it, and that’s bombings. Opponents are not convinced but eliminated. And since there are quite a few enemies in Lebanon to the Syrian government, there will also be other attacks. Syria has really a lot to do here, and I fear that the regime will not be afraid to look into that. One would think that Assad had just enough other problems.

How many murders go forward to his account?
Between the murder of Rafik Hariri in 2005, and that of the now slain chief of security al Hassan, some twenty personalities have been murdered.

Just before Hariri was killed, he had resigned from his post as prime minister to protest against the influence of the neighboring country
Yes, and then they had him blown up with a bomb, when he was in his car. A similar approach to Al Hassan’s killing.

I’ve heard you often sit in Beirut cafes. Have you done that in the past few days, too?
But of course.

What is there talk about at the moment?
About politics. But you have to be careful with whom. With people who have a different opinion, you should not overdo it at the moment with the debate. Everybody is nervous. Mostly you sit with people from your own side.

And what you have discussed with them?
We constantly reflect on how to force this government to its knees politically. There are so many problems here. The largest is Hizballah and its weapons. It is like a state within a state. The party still claims of itself to be the resistance against the Israeli occupiers. The Israelis are long gone, but Hizballah is still there. No other groups have such weapons.

Where do you go?
To Tripoli, Zgharta, and from there to the place of my childhood, about which I also write in my novel. Lebanon is tiny, from Beirut to Tripoli, there are only about eighty kilometers. From Tripoli to Zgharta only a few minutes.

You teach French literature at the University of Tripoli. In this city, there currently is a proxy war played between a Sunni neighborhood and an area in which Alawite especially live. There probably are road barriers and snipers. Several people have been killed. Don’t tell me that still, lectures take place?
The campus is in the vicinity of this area, and when the shootings are too violent, there are no lectures of course. But on Monday we will go on as normal. In recent days, the situation has calmed down.

Does it have to do with religion?
No, it has nothing to do with it. Religious interests might be added, but they are not the cause. As so often in Lebanon — this conflict is a very old one. The two districts have been actually arguing for thirty years. And always, if there are any incidents, like now the revolution in Syria, the heat is on again. It’s about family clans. What is operated here is political tribalism. In Lebanon, it’s always about group solidarity.

In your novel, it leads into a blood feud. The violence takes on such proportions that the military intervenes.
In some ways, the events in the novel are a thumbnail of what is happening in Tripoli. The logic is the same. In my novel, the actors are Christian families, while in the current events the families involved are both Shiite and Sunni. What happened back then was like a sneak preview for the later onset of civil war. To date, its impact in terms of the continued instability in the country are palpable.

Could the same also happen in Beirut when the situation there remains tense? Or are the neighborhoods less clearly attributed to communities?
During the civil war things were even extreme in Beirut. But, things have changed. It is still as bad, if you do not live in the same neighborhood as your community.

In what kind of neighborhood do you live?
All my life, especially Christian clans — I am Christian.

The mood between the neighborhoods has changed after the assassination?
No. It was clear that the attack goes to the account of the Syrians. Since there is no Syrian district in Beirut, you can move freely wherever.

They describe the Lebanese society as very macho. The men are hungry for foreign weapons and adore this more than the saints of the Church. Is that still the case?
I do not see why that should have changed. But women have a responsibility for the war-mongering. They share the concepts of honor of men.

Even today?
Beirut may be different. There, the women are free. But where strong tribal structures prevail, the group is trapped in a collective behavior. All in the same boat, and the captain is of course a man.

Unfortunately, it is. Not only Lebanon but the entire Middle East is suffering. There are arguments over things which are not worth arguing about. Problems with other communities, for example. These are in my opinion wrong problems, but because of them wars are conducted… Eventually you sit down at the negotiating table and talk, but also because the other does not resolve, you cannot break off the negotiations. Everything starts all over again. There is no end. Voilà.

How tiresome.
During the Civil War it was in Beirut as in the fifties in my hometown Zgharta: There was a demarcation line that could not be crossed. People from across the line are said to be diabolical, cursed loudly and shot.

And how is it today in Zgharta?
Quiet…

Many Lebanese are emigrating. Did you ever think of that?
I spent two years in France. When my wife got pregnant, we came back, because life there was too expensive for us.

And if war strikes again?
I won’t leave…
What kind of car do you drive? In your novel, it seems like all the people in Lebanon drive a Mercedes.
This will make you laugh! I am actually sitting in a Mercedes. People here love this car. Earlier I was in Beirut, in a traffic jam. There is so much going on because the Muslims are celebrating Eid El Adha. Here in Zgharta, where live mainly Christians, traffic is normal. We have jams at Christmas. This is life in Lebanon.