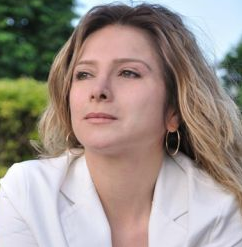 [1]“In the Shadow of Assad’s Bombs”*
By SAMAR YAZBEK, for The New York Times [2]
Published: August 9, 2012
* Copyrighted material. This article is reproduced in accordance with the New York Times agreement with the author and her representatives

IT was not yet 5 on Tuesday morning. I was lying on one side of the bed and the two little girls I was watching were on the other. None of us had slept a wink. Snipers’ gunfire rang out from time to time; bombs were crashing all around us. The girls’ frightened mother entered the room. “The bombing is getting worse,” she said.

We ran out, heading downstairs. Women and children and some men had gathered in the shelter. The children were now capable of distinguishing between the sound of bombs and gunfire, between distant and nearby shelling, and they could discern the direction from which it was all coming.

Ever since we had entered the country, running across the border late Sunday night, four young men had gone out of their way to protect me. They cut a hole in the barbed wire fence so that I could scramble through. A bomb fell very close to us as we sped away. Bombs were falling the whole way as the car zoomed along. As we passed through the town of Atarib in the dark, I understood what “extermination” meant. Atarib was a completely decimated city: the streets were cratered by bombs, doors were scorched, houses demolished, streets empty. At night not even the howling of dogs could be heard. It was a ghost town. No life whatsoever. Here and there, on one street or another, lay the charred remains of a government tank.

We should have gone to sleep after our long journey across the border from Turkey. We were exhausted. But in Saraqib, my host’s family had stayed up waiting for us, so we sat together into the wee hours of Monday morning as they told me about their neighbors who had been killed, about the young men who had been summarily executed in the town square.

Saraqib was one of the first towns to come out against the regime. The punishment was severe — siege, bombing, arrests and killing. Now it has five groups of Free Syrian Army battalions to protect it. Still, there are government snipers in the middle of town, with their headquarters inside the state radio and television building. There are nine in all; each works a four-hour shift in the building, which is protected by a tank that shells the town from time to time. Once, when the F.S.A. managed to take out a sniper, the government’s army responded by strafing the town with bombs. The townspeople say the snipers hunt people down and kill them at random.

A few days ago a sniper shot a 4-year-old girl, Diana, wounding her in the back, paralyzing her permanently. She was so small and frail that I couldn’t believe her body wasn’t totally pulverized by the impact of the bullet.

On Monday night, we went to meet a group of Free Syrian Army fighters in the town of Binnish. The oldest one was no more than 35. All were full of vitality and optimism, but also exhaustion. I shook hands with every man, except for one, who placed his hand on his heart and bowed respectfully.

They weren’t Islamic fundamentalists. I’ve encountered very few Islamist groups and have not observed any connection to Al Qaeda or Salafism, a movement based on a rigid, austere interpretation of Islam. The young men there told me that a few Salafi jihadis had started to appear recently, but that they did not constitute a significant number.

As we were sitting out on the balcony overlooking an olive orchard, the bombs started falling all around us. Nearby, the town of Taftanaz was being shelled; we could see it from the balcony. I asked the head of the division, who’d prepared dinner for us, “Aren’t you afraid that a bomb might fall on your heads right now?” He replied: “We aren’t afraid. Death has become a part of our lives.”

As we dined, the main topic of discussion was Aleppo, Syria’s most populous city. A number of the young men present were from the besieged neighborhood of Salaheddin and were getting ready to return. They refused to let me go with them for fear of the looming battle.

I was the only woman among them, and the young F.S.A. men treated me like part of the group. During that meeting it became clear that it’s a mistake to consider the F.S.A. as a single bloc. It is a hodgepodge of battalions, including secularists, moderate Islamists and all-too-ordinary people who joined up to defend their lives and their families.

At the end of our journey back to Saraqib, the commander told me, “We are one people, we and the Alawites are brothers. We had never thought about the sort of things that the regime is trying to stir up.”

I was silent for a moment, until I realized what he was telling me, the daughter of a well-known Alawite family that supports President Bashar al-Assad unconditionally. Some of my relatives have publicly disowned me for turning my back on the regime as many others have, announcing on Facebook that I am no longer considered one of them.

I squeezed the commander’s hand.

The children curled up all around me in the shelter on Tuesday morning were watching what I was writing. The women came together to recount the previous night’s events, which of their relatives had been killed.

Convoys of approximately 15 tanks bound for Aleppo were passing by almost every hour. The young men told me 80 tanks would pass today and that the shelling would only get worse, which meant we had to stay inside.

The electricity was gone. The atmosphere was becoming more and more suffocating. We could hear the roar of a fighter jet and then intense bombing. The shelling was getting fierce, the sound of bombs louder. It was very close. The children over 10 were growing anxious but remained silent. Younger children had started to scream.

The women in the shelter tried to come up with things to talk about. Only F.S.A. men were outside now. They refused to take me with them, saying that I had to stay in the shelter with the women and children until the battle was over. None of the F.S.A. guys were hitting the tank convoys; it was the regime’s tanks that were firing, and the snipers who were shooting and launching rockets. A young man from the F.S.A. told me, “We know they have bigger and more powerful weapons but we have our courage and our conviction in our revolution. We won’t let them humiliate us. We’re ready to defend our homes to the death.”

The women started singing. The shelter was getting hot. The children gathered around us were playing with some missile debris. “O young men, they call it Idlib, you can only back away from it,” they sang, in a taunting chant at Mr. Assad’s forces, mentioning one of the first provinces to rise up. “Don’t be surprised by these times of awakening, times of strength and victory. And fallen, fallen, is Bashar.” The children repeated the same verse, then raised their voices up high, “Fallen, fallen, is Bashar.”

When the singing was done, a woman added, “We haven’t had a decent night’s sleep for a year. As you can see, the bombing is continuous. This is how we and our children live. Those who haven’t yet died from the bombing and the arrests here are waiting out a slow death. And all of this because we dared to go out and demonstrate against Bashar.”

By 2 p.m. the tank convoy heading for Aleppo seemed to have changed course, which meant that the shelling might lighten up a little bit, but the sound of sniper fire had not abated. Nevertheless, in less than a half-hour a group from the F.S.A. showed up.

The leader was named Amjad, a young man with a degree from a midlevel technical institute who owned a clothing store in Saraqib’s souk until it was burned and looted by the regime’s army. He was quiet, his eyes shining. He seemed a bit sad. He didn’t shake my hand but bowed out of respect and sat down with the group.

While we talked, the planes returned, flying low over the skies of Saraqib. We heard the sound of a bomb but the conversation didn’t stop. Their arsenal was no match for the weapons of the regime’s army. The success they had achieved on the battlefield against Mr. Assad’s army depended on their bravery. The commander of the group didn’t speak at first but soon got involved in the conversation.

“We’re a group of autonomous battalions that don’t obey a central command structure. And we’re out here working on our own. Most foreign support goes to the Islamists,” he said. “We have sold our sisters’ and our wives’ gold in order to buy ammunition and defend the town.” He was afraid of what might happen if they gave up and the regime survived. “Young men will turn toward fundamentalism and extremism. The Syrian people have already been subjected to impoverishment. And after a year and a half the Syrian people have begun to take care of themselves, now that the world has abandoned them. I worry that things could get even worse,” he added.

The group commander stopped talking and we heard the sound of a bomb falling. I said goodbye and we promised to meet the next day. When I got back to the shelter another woman had arrived with a fresh story.

“There was an apple seller who came to Saraqib today. He was killed by that sniper up on the radio building. An army patrol passed by, took the apple cart and they all started eating the apples even as the merchant’s corpse was sprawled out on the ground,” she recounted. “The apple seller’s son was shouting and crying for someone to help him move his father so that he could give him a decent burial. One of them motioned at the son to go and ask the neighbors for help.”

Before the sound of a fighter jet flying overhead boomed, the woman said, “Poor guy. He was just a stranger who wanted to sell his apples.”

Samar Yazbek, a novelist and journalist, is the author of “A Woman in the Crossfire: Diaries of the Syrian Revolution.” This essay was translated by Max Weiss from the Arabic.