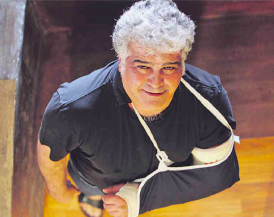 [1]“Nobody wants the Syrian revolution to be successful, we are alone”
By Enrique Clemente, for La Voz de Galicia, June 26th, 2012
Excerpts in English below.

He has his left arm in plaster following blows he suffered last May 26, on behalf of Bashar al-Assad’s secret police when he participated to the funeral of his friend the musician, Rabi al Ghazi, opponent to the regime, who was killed by a shot in the neck.

He is convinced that changes in the Arab world are irreversible and that the revolution had triumphed in Syria.

-You send a letter in February to the international community to denounce what is happening in Syria.
-It was addressed especially to my fellow writers and intellectuals, for them not to become silent witnesses to the genocide of my people and for them not to say that they did not know. I told them what was happening in Syria to sensitize and have them and adopt an ethical stance.

-And you were saying, for example, that the regime prevents doctors to reach stricken areas and hospitals are targets.
-It is true, you can not ship medicine to many areas. Many doctors have been killed or imprisoned solely because of caring for the wounded.

-Some analysts see a growing influence of fundamentalists in the revolution. Even radical Islamists can fight in Syria.
‘No one can speak of Islamist influence. There is a movement of the whole people which covers all currents and is trying to organize itself to continue the struggle. That people are going to Syria or elsewhere is the reason why we are seeing it. Given, moreover, that the Syrians are alone against the regime. But I can assure you that I know the revolution well from the inside and I’ve only seen Syrians. Moreover, the Syrians have already made the decision to continue the revolution, which began pacifically, but in response tp the barbarism of the regime some groups has taken weapons. Most go on the streets unarmed. Therein lies the secret of the Syrian revolution, in the value of its people.