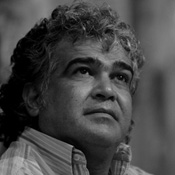 [1]The rumor this afternoon, May 26th, was that Khaled Khalifa was arrested in the morning while attending the funeral of a friend in Damascus. He was released with a broken arm and contusions to the head. On the phone, Khaled Khalifa said he was now alright. The LA Times [2] gives the following details.

Khaled Khalifa, one of Syria’s best-known novelists, was beaten Saturday during a funeral procession in Damascus, the Syrian capital.

Activists said members of the shabiha militia and plainclothes security forces attacked the procession to disperse it and detained at least two people. Khalifa, author of the novel “In Praise of Hatred,” said in a phone interview that his hand was broken.

“They were approximately five men. It all happened on the street. My left hand is broken. I write with my right hand, but typing on the computer is difficult now,” Khalifa said.

Khalifa was participating in the funeral of a friend, Rabi Ghazzy, a Syrian musician, who was killed overnight in unclear circumstances. Ghazzy’s body was found in a car parked in front of a hospital in Damascus, his sister said. He had been shot in the head, she said.

Pro-government enforcers tried to stop people from walking in the procession and started beating people, including Khalifa, said a witness who asked not to be identified.

Rima Marrouch in Amman and Alexandra Sandels in Beirut