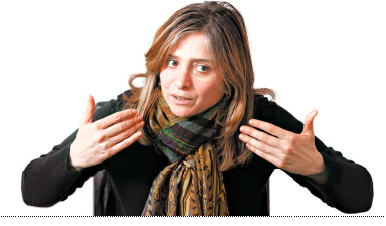 “Our heroes die”
A conversation with Syrian author Samar Yazbek, who has documented the revolt against Assad “in her book The cry for freedom”.

Before the interview with the Syrian writer and journalist Samar Yazbek begins, we met her in the middle of Paris, at a demonstration against Assad. Her seventeen year old daughter stands on a truck, at the head of the march chatting numerous slogans against Assad. Samar Yazbek often looks up at her and smiles. Not long ago this was the daughter who the mother was worried about, the one who pleaded for her to stop her activities against the Syrian regime.

At that time, almost half a year ago, Yazbek documented the revolution in her country. She traveled from town to town, spoke with soldiers, survivors of killings, who saw their friends die. The Secret Services arrested her and attempted to make her change her mind, because Yazbek comes from a distinguished family, which belongs to the Alawite minority – as Assad does. But Yazbek, who was born in 1970, did not concede. In the summer, finally she left Syria, as security officials had threatened her daughter.

Samar Yazbek tells her experience in the recently published book “Cry Freedom”. A report from the interior of Syrian Revolution.

Zeit: Ms. Yazbek, your book is a personal documentation of the first months of the revolution in Syria. You write about the demonstrations, arrests, and the chambers in which the tortures were led by intelligence. It is a book about fear.

Samar Yazbek: I wrote about fear because I myself was very much afraid. I’ve seen people mutilated. I saw them lying in the cells where they were interrogated and tortured. I was not prepared for such brutality.

Zeit: You are now living in Paris. Are you still afraid?

Yazbek: I’m safe here. I’m not afraid for myself anymore. But for those I left behind.

Zeit: Were you threatened in Paris?

Yazbek: There were letters of threat, but this is nothing special. Perhaps some Alawites loyal to the regime have written them. The regime itself is in any case currently not able to reach me, because it is caught in the fighting.

Zeit: What population groups are on the regime’s side?

Yazbek: Very few. But many fear for their interests.

Zeit: Who are you thinking of?

Yazbek: The Syrian dictatorship lived as a parasite of the Alawites, basing themselves on an alliance with a range of rich families. Alawites, however, make only ten percent of the Syrian population.

Zeit: And now, Sunnis are against Alawites?

Yazbek: Yes. But if the majority of Sunnis are on the streets, this does not mean that it’s about religion. Among the activists who mobilize and organize demonstrations, there also are Alawites and Christians. This is not a confessional conflict. In fact, the Regime also maintains alliances with some Sunni entrepreneurs. Flows from these transactions pour into the Shabiha.

Zeit: … the mercenary troops, who are brought out against the people.

Yazbek: With the start of the riots the intelligence, formed and armed new formations. Recruits are poor, they rely on what little pay they can get, and they are criminals. For me, it was a shock to see mercenaries, these death squads.

Zeit: There are rumors that Iranian officers were involved in the massacres.

Yazbek: We can not prove it. Sure, there is the fact that Iran provides logistic support, by providing hackers that break into Facebook pages.

Zeit: The Secret services have tried to make you retract your sayings because you are from a known Alawite family. You refused. In this family
you are now a traitor, and even if the regime falls, you will remain a traitor.

Yazbek: Alawites like me, refute the Regime’s claim that this is a religious rebellion. And the price I pay is nothing compared to the price the Syrians in Syria are currently paying.

Zeit: Do you feel abandoned in this fight? Only recently have China and Russia blocked a resolution against Assad.

Yazbek: I was sad. But it’s now become clear to us that we can only count on ourselves. We have to organize our own rebellion.

Zeit: Are you for a military intervention as in Libya?

Yazbek: In Syria, there is a completely different Situation than in Libya. There were specific interests of individual countries to engage in Syria. But we have virtually no oil, and engage in Syria, and you engage in all the problems of the region, Israel, Lebanon, Iraq, Iran … Who is interested in getting entangled in this kind of web? The only imaginable thing would be a protection zone at the Turkish border.

Zeit: What do you wish for?

Yazbek: There is no room for desires. Let’s say this: In the end we are for anything that crushes the regime.

Zeit: Supply of arms to the insurgents?

Yazbek: I myself am against guns and against the killing, but that is now outside my world, I have no influence thereon. Ultimately, I am standing on the side of the Free Syrian Army, because it protects the population. But we must be careful. We should not tolerate acts of revenge and allow no murders along religious lines.

Zeit: Are the Syrians experiencing a civil war?

Yazbek: I’m afraid that the longer the struggle lasts, the more brutal. The Syrians are now beginning to defend themselves with weapons, and this will impact the whole society. The longer this takes, the greater the probability that a culture of violence spreads.

The courage and the serenity of this people are unique in history, despite attempts to stir up sectarian conflicts to which the population as a whole did not respond. On the contrary: it is a small wonder that under these conditions, a kind of civil society was formed. Suddenly, people have formed resistance, and created co-ordination committees from scratch.

Zeit: What role do women play?

Yazbek: They are crucial. There are many female activists. They give first aid, document the revolution, organize coordination committees. And they mitigate religious tensions by attending funerals of the other religious groups, for example.

Zeit: Could we say that the women also prevent men to take arms?

Yazbek: I would rather say that the women are the peaceful and civilian face of the revolution. But women still have their own battle to lead, and later, to fight for their rights across the Arab world. After 50 years of dictatorship, the population in most of these countries are very conservative, which is why the situation of women is even worse if the regime falls.

Zeit: Immediately after the elections in Tunisia, there were verbal attacks on single mothers. You have raised your daughter alone in Syria. Do you fear that this will no longer be possible?

Yazbek: Yes, I have this fear.

Zeit: And yet you want to go back?

Yazbek: I want to be a part of the social change. It depends on each individual.

Zeit: Do you talk about your daughter’s future?

Yazbek: All the time.

Zeit: What do you talk about?

Yazbek: About how it will be when we’re back? About when and if my daughter will have already finished her studies or not?

Zeit: In your book you say that the images of the torture chambers are always there when you close your eyes. Didn’t you get rid of these images yet?

Yazbek: I always see them before me. But the murders, the torture and brutality that I’ve seen, I have even more admiration for the people
taking to the streets. I have seen with my own eyes, how they stand unarmed, get shot, and come back the next day. I could never be at ease with with the word ‘heroism’. It was strange to me. But these people are there on the streets. For me, they are heroes.

Zeit: In your book you write: The only freedom is death.

Yazbek: I did not write this sentence out of despair. I used to see death as something big. Today it is so common in Syria. I always knew that death is easy, but now I experienced that he it actually happen every day.

Zeit: Taking one’s own death is not important?

Yazbek: I was born without my will, I live without my consent, and I will die in the same way.