Screenwriter and novelist Samar Yazbek is a chronicler of the now eleven-month-long uprising against one of the most repressive regimes in the Arab world, which for decades has held 20 million Syrians hostage, and suppressed all opposition with the help of a vast intelligence apparatus. The daughter of a prominent Alawite family, the minority in the country who is also president Assad’s, she recorded the 100 days from 25 March to the 9th of July 2011, from a close range, at home.

Samar Yazbek describes in haunting words the all-pervasive fear, “as part of them as breathing,” she explains what it means when the gangs on the street mean death, describes the omnipresence of the secret services and the police, who will stand by while people are beaten, kicked and arrested, how even children are abducted by the dozens and put in prison.

“In the crossfire” [“Cry Freedom” in German], is the title of this mortifying report from inside a torn country, to be released in late February. 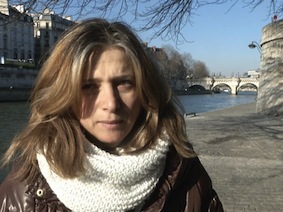 [3]“I will only believe what I see with my own eyes” – Samar Yazbek with that intent, begins her diary immediately after the outbreak of the Syrian uprising in the small town of Dara’a. In the Alawite community, she will henceforth be regarded as a traitor, vilified and threatened. Nevertheless, she goes boldly on the road, traveling through the country, writes down what she sees and hears. Again and again she get news of deaths, casualties, arrest of friends. She speaks with protesters as well as with police officers, interviews dissidents released from prison. She soon gets herself into the visor of the secret service. She is repeatedly taken in and brutalized.

“The reality I’ve experienced is by far more incredible than fiction. When I was taken in, I was led to a subterranean prison. What I saw there was so horrible, more than what I could have ever imagined. Faces completely smashed, bloody bodies torn, raw meat. People who, a few weeks earlier, had been merry 18, 20 year old young men. Such images make you lose your mind” says Samar Yazbek.

A participating witness: “When, for months on, you live in daily fear of death, when any moment can be the of the last, when right next to you people get shot, then something strange happens: At some point, fear turns into courage. A moment where you feel that they can not kill us all. We go on now till the end. whatever happens. ” When she learns that her name is on a death list, she flees with her daughter abroad.

“Samar Yazbek is a very special woman,” says Rafik Shami, who also wrote the foreword to her book “Cry Freedom”. “She comes from a very respectable family, she was privileged, but she did not let herself get corrupted. This is why she is so dangerous to the regime, and why they hate her so much. Because she can describe accurately the life, the corruption, the cynicism inside the elite in power”.