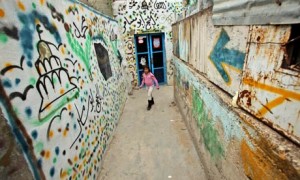 A Palestinian girl walks in an alley in the Silwan neighborhood of east Jerusalem, where the closing event took place. Photograph: Muhammed Muheisen/AP

It was the final day of the fourth Palestine Festival of Literature and I knew it was going to be a long day.

I’m a student volunteer at the festival, and the closing event was to take place in the Silwan Solidarity Tent – a public meeting point in a deeply threatened neighbourhood of my city, Jerusalem – with more than twenty writers from all over the world.

I decided to skip my first lecture for two more hours of sleep. I skipped the last one for a ride home from my university to Jerusalem – in a car with Israeli number plates you can avoid the militarized humiliation and air pollution of Qalandia Checkpoint, which separates the Israeli from the Palestine area.

The journey began at 2pm with a series of phone calls, each with a new surprise, a new problem. After an hour on the bypass road, entering Jerusalem, we were pulled over by an Israeli patrol. I had to get out and walk to Damascus Gate dragging my suitcase behind me, its fabric mottled with “security” stamps in Hebrew (the daily commute through Qalandia stamps you as if it were an airport).

I walked the final stretch to meet Najwan Darwish – a poet from Jerusalem who is one of the organisers of the festival. As I updated him on our list of problems, his phone wouldn’t stop ringing either. Last minute changes meant we needed a talented technician and a very specific sound system for DAM, the night’s rap group.

The fumes in the street were suffocating us and when April’s gritty, sand-heavy winds started blowing Najwan hurled the flyers in the air and shouted “You spread the brochures, I’m done with this country!”

Just in time our producer appeared. He had found sound equipment and needed a car to pick it up. We picked up the scattered flyers, and got into Najwan’s car, a patient car capable of any mission. At the music store, it became clear that the sound equipment would be enjoying my seat in the car. I was abandoned in the street to wait for another driver to pick me up.

Just before 7pm, as we drew near the outskirts of al-Rababa Valley in Silwan from a bypass road that can only fit one tiny car, two Special Unit jeeps blocked our way, and would only let us through on foot. So we got out started to walk. While we were climbing down to the tent a hail of bullets rang out around the valley and we scrambled to take refuge under an old olive tree. With the soldiers at the top of the valley above us and the tent down below, my companion turned to me and asked if I’d brought him to volunteer or become a martyr. But with plenty of adrenaline and God’s protection we cut through the valley like a pair of birds.

Down at the tent the audience were starting to arrive. Unfortunately the authors weren’t, because the roads to Silwan were closed.

Just as I started to apologise for the delay, two cars full of Israeli settlers raced through the streets, veering towards people, and the soldiers launched rounds of tear gas around the festival tent from the top of the hill. We quickly got the audience out. A child had fainted inside and I wasn’t able to help him until a journalist with a gas mask appeared.

The people of Silwan gave us onions to help with the gas. You hold a segment up to your nose and it counters the effects, helps you breathe. We climbed down the hill and found the group of writers standing next to their bus. We shared our onions with them and told them not to go to the tent, it was too dangerous.

I had left my suitcase behind, though, and had to sneak back to search for it in the thick darkness. As I started my journey back to safety I was confronted with a procession of writers, who were strolling toward the tent like royals, sniffing onions as if they were roses.

Despite all the warnings, we turned the lights on and quickly set up. The event happened – the readings, the music. And though it was so international, it felt like a family event in that tent. We brought the festival to a proper close through faith, literature and three kilograms of onions.