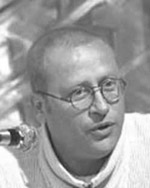 [1]University of Washington honors the memory of a former student, Hussein Al Barghouti [2] on Monday, May 2, at 4:00.

In 1992, Hussein Al-Barghouti (1954-2002) graduated from the University of Washington with a PhD in comparative literature. Within a few years, he became one of the most respected contemporary Palestinian authors and, as a professor, inspired thousands of Palestinian students at Birzeit University in the West Bank. He documented his Seattle experience in his book “The blue light”, which chronicled his adventures as he attempted to comprehend his life mission during his exile from home. At age 47, Al-Barghouti died of cancer on May 1, 2002 in Ramallah.

At this event, the author will be remembered through a series of talks and a short tribute film.

This event is co-sponsored by:

The Simpson Center for Humanities, Department of Comparative Literature, English Department
The Middle East Center
Distinguished Members from the Arab-American Community in Washington