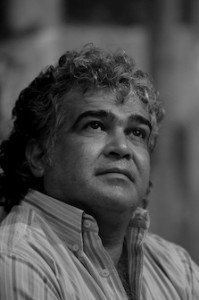 [1]Starting tomorrow, Thursday May 13, 2011, Khaled Khalifa is on a tour in Europe for the launch of his book ‘In praise of hatred’ [2], coming out in three languages at the same time.

Between 2008 and 2009, the book’s rights had been sold in six languages. Two years later, the book is finally out in three of them: French (Sindbad, Actes Sud), Italian (Bompiani) and Dutch (De Geus), while we still eagerly wait for the English (Transworld, Random House), Spanish (Lumen, Random House) and Norwegian (Minuskel) versions to come out.

Wandering what the reception the press and the readers will reserve to this dense and intense story, we can only be struck by the coincidence of the book’s publication in the West and the current events in Syria.
In praise of hatred is the story of the Syrian regime’s repression of the Muslim brotherhood in 1982, told through the eyes of a religious and activist young woman. The protests started last March are the first time the Syrian people dare defy the regime so massively in thirty years.

Khaled Khalifa will start his tour in Turin [3], as a guest of the Lingua Madre literary festival, taking place at the heart of the Turin Book Fair. Guests of this year’s Lingua Madre also include the Lebanese Hanan Al-Shayk, the Iranian Marina Nemat, and Tahmina Anam from Bangladesh. They will focus on the recount of dramatic stories of conflicts between a tradition closed in on itself, to the point of becoming violent and oppressive – especially against women, the classic victims – and a form of modernitìy lived as subversive and immoral. The Chinese-American Leslie Chang gives a masterly description of the harsh reality of working class life in China. The Brazilian Luiz Ruffato tells a story in which language is at the centre: a Brazilian who is seeking fortune in Europe comes up agains the threatening difference of everyday talk. Another young Brazilian writer, Tatiana Salem Levy, offers an unusual meeting of cultures, seeking out her family roots as far away as Turkey.

On May 16th, Khalifa will be talking to the press in Paris. On May 19th, he will be at the Halles [4] in Bruxelles. This interdisciplinary space for Artistic creation hosts a special ‘Arab Worlds’ event during that time.
On May 31st, Khalifa will conclude his tour in Amsterdam.