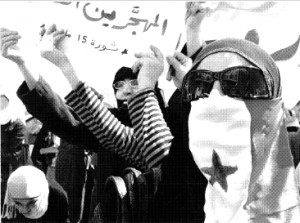 [1]An interview by Riccardo Stagliano for Venerdi, Supplement to La Repubblica, May 13th, 2011.

You may not know it, but Syria is already in the midst of a revolution

The death of Bin Laden? “A good news.” The riots in the streets? “Even more”. The writer “censored” for his novel In praise of hatred explains why there is no turning back.

“We shall see how it will end in the coming months, but I know of no people who took to the streets to go back home defeated. And this time the Syrians have decided to take all their rights, from first to last.” Khaled Khalifa is convinced. His ‘In praise of hatred’, shortlisted in the first edition of the Arabic Booker Prize, and now out in Italy, tells from the perspective of a young girl the story of a family of Aleppo, the author’s hometown. Three generations face to face, on a backdrop of clashes between Baathists and the Muslim Brotherhood in the eighties.
The novel, banned in his country (“But I do not want to use this as an advertisement”) and then republished in Lebanon, describes the tension lived by a society that broke out again today.

“These revolutions are not the daughters of intellectuals, but some of us have had the merit of exposing those who, obeying the orders of the regime and giving up their independence, helped to instill fear of the future in our society. Do you think they can justify the siege, the starving children, the disruption of electricity and water, such as that suffered by the inhabitants of Dera?” he writes in Arabic, in a response transited to us by Elena Chiti.

The news that everybody talks about is the killing of Osama Bin Laden, do you feel and that will have repercussions on the Islamic world?

“I believe that killing Bin Laden will mark the beginning of a weakening of Islamist terrorism. It is a clear victory, striking for the emerging Arab democracies because, as you know, Arabs are the ones who have paid the ultimate price of this violence. Yes, I’m happy. And the fact that Bin Laden is killed just as my book is about to meet readers from other cultures is a remarkable coincidence. Read it, and you will discover, for example, that one of its main characters is affiliated with Al Qaeda. ”

Could you explain the meaning of the title In Praise of hatred? Didn’t you fear that it was too strong and that it could be exploited by the many who are already critical of Islam?

“Hatred and extremism do not stem from Islam as a religion, with its corpus of texts that are subject to different interpretations. They come from some individuals who, in the eighties of the last century, belonged to political islam and other left wing or nationalist parties and cultivated a form of praise of hatred. The title does not only refer to Islamists, but to any closed culture that prefers elimination over dialogue.”

Your novel describes the growth of religious fundamentalism in Syria. In Aleppo, a city of commerce, almost all women are veiled, more than in Damascus, because there was this radicalization. What can be changed now?

“The power in place is the first responsible for the Islamization and fundamentalism in Syria. The Minister of Waqf (which manages the dead hand assets) has allowed for the construction of nine thousand mosques by the Syrian State, and at the same time, prohibited the expansion by a hundred square meters of a move theater!
The lack of freedom – of speech, press, association – has made Syrians a desperate people. But the amount of veiled women that you have seen does not correspond to an increase of fundamentalism in Syrian society. Paradoxically, it only expresses a rejection, latent but not extinct, of institutional policies. At this time we are not witnessing the complaints of a group of opponents, but a full-scale uprising, which is turning into a revolution. It involves all classes and all religious groups of the Syrian society.”

Your characters move between the repression of the Baath Party and the heavy morale of the Muslim Brotherhood. Between these two extremes what is the lesser evil?

“The Syrian culture, in its daily practices, does not allow intransigence. The history of Syria bears witness to a big openness to the Other. If the Syrians had accepted extremism, the Muslim Brotherhood would have had an easy game to win in the eighties. I believe that the Syrian society will make the roots of its civilization prevail again and for the first time in five centuries, the Syrians will be able to start building a democracy that represents them, based on tolerance and on the use of free elections.”

What do the Syrians that took to the streets ask for, and what can they get?

“Most of the Syrians have lost patience and overcome the fear, despite the disproportionate reaction by which the power has stifled the popular demands. The Syrians simply express the will to put an end to the interference of intelligence agencies in the civil and political life and to participate in decisions that affect them. The disproportionate reaction of the regime derives from the request to dismantle the regime. And let me express my pride for the courage of my people, which is making a legendary feat, a feat that will surprise the world as soon as its details come out. I think the people will win, even if we do not immediately achieve all our objectives. ”

In 2000, when he came to power, the young Assad had kindled hopes of reform: what went wrong?

“Syrians had hoped that a young president would change their lives, but we have overstated his role, considering that he had no political past. And although he appeared as a reformer, it is equally true that the Syrian regime is a block that does not permit to anything to stand back and take a direction of its own. Before this uprising, we were many to believe in the reformist intentions of the President, while doubting his ability to put them into practice on the model, for example, of the Moroccan system. But starting March 15, with the first drop of blood shed in Deraa, then in all other parts and cities of Syria, the fight began and the issue of government reform has been put aside. It will only be discussed after the current leaders pay for all this bloodshed”

Full article below, in its original Italian version.