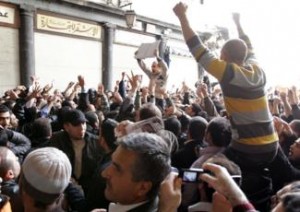 [1]Waiting for Death: I will not carry flowers to my grave
By Samar Yazbek [2]
Translated by Anne-Marie McManus, published by Jadaliyya [3].

It’s not true that, when Death comes, it will have your eyes!
And it’s not at all true that the desire for love resembles the desire for death. It’s not the same moment – maybe those desires are similar in nothingness because both are swimming in dissipation. In love, we merge with the other. In death, we merge with existence and transform from the tangible, the material into an idea. Humans’ ideas have always been nobler than their existence. Otherwise, what’s the meaning of that sacredness surrounding our dead? One of them could have been among us only moments ago; when he disappeared, he became a flash!
&nbps
I won’t say that I am calm now. I am truly silent. I listen to the beats of my heart like the echo of a distant explosion that is clearer than the sound of the bullets, than the shouts of the young, than the wailing of mothers. Clearer than the tremor in my mother’s voice when she implores me not to go out onto the street:
The killers are everywhere.
Death is everywhere.
In the village.
In the city.
Along the seashore.

The killers plunder people and places. The killers terrify the people, they spread out before the houses of the neighbors, they gesture to them that we will kill them. Then they come to us and they shriek: those people are going to kill you all!
I am the sudden visitor in this place. I am the itinerant in life. I don’t belong to the world of the living; like a wild animal, I have swum in nothingness. I have wandered, emptied of all but the freedom of my being. Here, I look out of the windows and watch what is happening, then I become more calm and am silent. My voice does not emerge, and in these moments I remember Omar Amiralay and what he said on one of the mornings when we sat together. I said to him: I will write novels about the history of this country. He said: don’t take too long! At every moment I see the outline of your deferred death. I laugh, and he adds with a smile: If it weren’t for your daughter, of course!

Ever sarcastic, Omar didn’t speak that sentence lightly; he knew of my relationship with Death, the lot of my existence. Death resembles love; to be free of it, be in it! And if you want this love to continue to burn your heart, give it the space to do so.
I wanted to finish quickly with this existence. I didn’t know, in the midst of the details, that this apathy would make of me a woman of such sternness, such fragility! And that I would cling to life with this much fear. Fear of what? How can people be afraid here? They don’t know that they are living fear. Their fear rules then like their gasping for the next breath. Since I first lived in the capital with my daughter, fifteen years ago, there has always been a knife in my bag. I carry it wherever I go. A small, sharp knife with a switchblade. A knife ready for self-defense. Years ago, I used to say: I will sink it into the body of anyone who tries to insult me because I am a woman who lives alone. I didn’t use it a lot; a few times I drew it in the face of shocked men. But, later, I started to say: I will sink this knife into my heart before I let anyone affront my dignity. What does everything that I say mean now, in the midst of this feast of Death! Stepping out onto the street is an opportunity to die. This idea charmed me: to walk on a street and feel that someone is there who will kill you at any moment. An insane idea. But it’s strange, to go out with friends to a demonstration and know that there are men there from the security services who might shoot you at any moment. Those same men who have been stepping on the necks of people for decades, humiliating them, betraying them, arresting them, killing them, then walking into the street with cold blood.

How does the human body transform into a lethal killing machine? Hands, eyes, hair, head – all those body parts that resemble your own; how do they turn into huge antennae and long fangs? In the blink of an eye, reality transforms into fantasy. Reality becomes more brutal than imagination. They say that writing a novel requires imagination, but I say it requires reality – first, second, and third – and that what we write in our novels is less savage than what happens in reality.

The lying woman appears on the television. My mother says, Listen! She’s talking about treason and sectarian chaos – God save us – close the windows!!! We and the neighbors, don’t take her words seriously because we are more than just a family! I argue with my mother, but suddenly I weep; the images of the tortured children and the murdered young men return. The face of a child I carried in Merjeh as he saw his family being beaten and arrested. I hear a man talking on the television about the blood of the martyrs in Daraa, demanding revenge, then he says: We will not respond to this woman (he means the lying woman), and we won’t respond to women – should we pay attention to a woman?!

Everything that is happening doesn’t make sense to me: my family’s applause for that woman and my friends’ applause for the blood of the martyrs. I am ashamed of the blood of the martyrs and I fold inwards over my heart. Oh God, if a human mistake has been made, and it becomes clear that you really sit in Heaven, and you don’t want to come down to see what is happening, then I will stretch out my hand to you and pull you out of your seven skies so that you will hear and you will see!
I go out onto the balcony, and the lemon trees refresh me. All is quiet here for a few moments, then the flames erupt again. Everyone knows that this city was calm – not a natural calm – the hold of the security apparatus was firm and no one could cause problems. The security services are always on the street. Suddenly, the city’s streets transform into carnivals of horror. Suddenly, chaos sets in. Members of the security services watch people, who sometimes run away, or are disappeared. The gangs that have come out of the earth sprouted like anything else here – from nothingness, without logic or reason. How did these gangs of madness spring out of the earth, how did they kill people? How did they make bullets dance between our feet and under our windows? How did all this happen? People wonder. The same gangs go to our Sunni neighbors and frighten them, saying that we will kill them. They come to us, and say that they [the Sunni] will kill every single Alawite. I am the visitor in this place, and I watch what is happening with horror. I am the exile from the city and the village and the air of the sea. I receive sharp looks from everyone, from every side. I know the two sides. I know the faces of the other life in Damascus, where the city has turned into another kind of village?!
What am I doing here?
Am I waiting for Death?

As long as I know that, and while I do, I am wrestling with it. The same story start over again: saboteurs, infiltrators. I curl up into myself: I am an infiltrator now among my family. An infiltrator in my bed. An infiltrator in a silent and impossible love. I smuggle myself into everything, and I am nothing. I am a piece of flesh that curls up under the blankets, I infiltrate even the veins of the asphalt on the street! I slip into the sadness of every Syrian who passes before my gaze. I listen to the sounds of bullets and the shouts and the prayers. I am a piece of flesh that walks in the morning from house to house, that tries to find a last piece of paper for salvation and to claim that it is doing anything at all. A dishonest thing, chosen based on my belief in working for justice – but what would that be now? Nothing! All of the slogans and all of the pain and all of the hatred that incites killing and death mean nothing now before this reality: the streets are deserted, a city of ghosts. Military vehicles are deployed everywhere, but the army is nowhere to be found. Where has the army disappeared to, and who believes this sham now? The army has allowd gangs to kill and terrorize the people, and no one intervenes. The security services, who used to terrorize the people have suddenly turned into weaklings before these gangs.
What is this madness?
&nsp
It is Death, that moving being who walks on two feet today. I hear his voice; I stare into him. I am the one who knows his taste, I am the one who knows the taste of the knife against the neck, the taste of boots against the neck. I have known him for a long time, since I first fled from this narrow world, and since my second and third escapes. I am a deferred honor killing in my family, a deferred killing for the betrayal of my society and my sect and…
I am no longer afraid. Not because I am brave – I am so fragile – but because I got used to it!
I no longer fear Death. I wait for him calmly with my cigarette and my coffee. I think that I can stare into the eyes of a sniper on the roof of a building. I stare without batting an eyelid. I go out onto the streets and stare at the roofs of the buildings, calmly, and walk. I cross the pavements and a square in the city. I think, where could the sniper be now? I think that I will write a novel about a sniper watching a woman walking calmly on the street. I think about them both, as two lonely heroes in a city of ghosts. Scenes that resemble the streets of Saramago in the film “Blindness.”

I return to the capital, and I know that this place is no longer as it once was. Fear is no longer like breathing! Life here has changed forever in a single moment.
I return, and I know that I will not despair of struggling for justice, even if my chest is opened for Death. As I said, I got used to it, no more and no less: I wait for him, and I will not carry flowers to my grave.

Below, the full Arabic version, published by Al Quds