A Damascene Diary
by Samar Yazbek 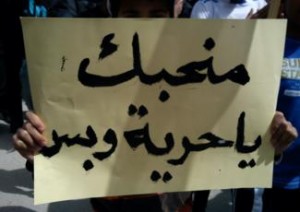 [3]
A Sign Held by a Syrian Protester “We Love You Freedom. Only you!” Image from Unknown Archive, published by Jadaliyya

***
I will infiltrate the dreams of the killers. I will ask them: did you look into their eyes when your bullets closed in on their chests? Did you glimpse the hole of life? Before Damascus’ sky darkens, why don’t you look at the smooth red circles around their foreheads and stomachs, where our eyes will come to rest? Here in Damascus, the killers’ eyes will soon be sleeping. And we will keep watch over fear.

Death is not a question. Death is a window we open out onto other questions. Like every other city, Damascus is more beautiful at night, like a woman after lovemaking. But tonight, she has left a pallid violet hue over her usual darkness. So we might almost make out the killers’ eyes as they spread through the streets. Who is killing from the rooftops and behind buildings? A coward? A killer can only be a coward – how could he be brave when he’s abandoned his moral compass?

I leave the house and head for the city’s squares, its mosques. Now, in the middle of the day, I should know the city – street by street, square by square. I won’t believe anything but my own eyes. Even truth was a foolish man this morning. A man who doesn’t know love, walking before me and sneering at me. How can we talk about truth when people are hiding in their houses? The city’s squares are empty, perhaps because today is a holiday. But everyone is hiding in his or her own fear today.